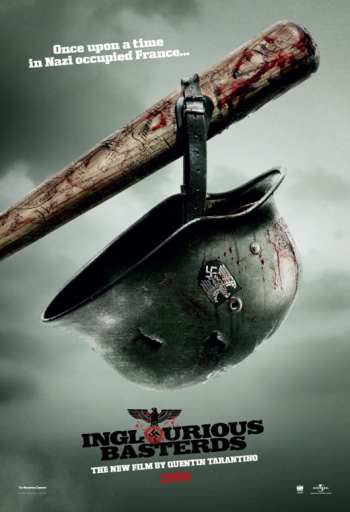 The sixth film by Quentin Tarantino. Set in an Alternate History version of World War II, it is about a group of Jewish-American commandos and numerous plots to assassinate the Nazi leadership. The Jewish soldiers are known to the Germans as "The Basterds", a terrifying group who massacre as many Nazis as they can find, scalping each one but leaving a single man alive to spread the word of their deeds. Oh, but not without carving a swastika into his forehead with a knife.

A young German sniper finds himself the subject of Goebbels' latest propaganda film, the premiere of which he decides to relocate to a small cinema owned by a girl he takes a liking to. Unbeknownst to him, this girl is a Jew whose family was massacred by the Nazis four years ago, and she takes the opportunity of so many Nazi leaders coming to her cinema to take revenge. Upon finding out about the premiere, the Basterds also plot to destroy Hitler and his high command at the event despite being pursued by the SS officer who slaughtered the cinema owner's family.

A large source of confusion derives from Tarantino letting the script get out of hand (read miniseries.). This planned miniseries was scrapped when a friend of Tarantino told him he's the only director who actually gets him to go to the theater. So he scrapped most of the plot and backstories, and what was left was a movie in which the titular Basterds were not quite focused on.

On a sad note, the film is the final collaboration between Tarantino and editor Sally Menke, who edited all of his films until her death in 2010.

Huge spoilers lie ahead. In fact, it's best you go see the movie before looking at the tropes. Trust us, it's worth the 2 hours.

Tropes used in Inglourious Basterds include:
Retrieved from "https://allthetropes.org/w/index.php?title=Inglourious_Basterds&oldid=1946803"
Categories:
Cookies help us deliver our services. By using our services, you agree to our use of cookies.