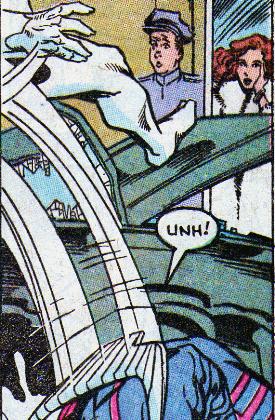 Not much a wealthy Socialite and her chauffeur can do here but keep their distance.

Ah, the Innocent Bystander, where would Villains be without them to use as Human Shields and the heroes to rescue in a Hostage for McGuffin? This noble profession has been much maligned by its incredibly high mortality rates and penchant for being in the wrong place at the wrong time.

Though similar to Muggles, the main difference is that the Innocent Bystander is not necessarily clueless or mundane (superheroes, wizards, or mutants can be innocent bystanders in the right, or wrong, circumstances), they just happen to be near a situation most qualified heroes would be hard pressed to escape alive. Essentially, they are those who must be protected, rescued or saved from a villain who will eat, kidnap, torture, or kill them. Since they're pretty expendable, it's even odds a few will be killed just to show how evil the bad guy is.

If the Bystander gets dragged along for the ride (be it as a hostage or a press-ganged helper for the hero), they may get upgraded to Mauve Shirt. If a Running Gag is made of how the same Bystander(s) keep running into the heroes, it's an example of a Yuppie Couple. If there's a whole bus full of these, it's a Bus Full of Innocents.

Quite a few series start with this premise. Arthur Dent of The Hitchhiker's Guide to the Galaxy is essentially an Innocent Bystander caught up in events he can't understand. By the end of the series he becomes something of a Heroic Bystander, though. They do get a chance at the spotlight sometimes though; check out Innocent Bystander Series, and its cousin trope the Lower Deck Episode.

Innocent Bystanders are often the targets of:

Compare with the Action Survivor (who is essentially an Innocent Bystander as an action movie protagonist).

Examples of Innocent Bystander include:

Retrieved from "https://allthetropes.org/w/index.php?title=Innocent_Bystander&oldid=1815210"
Categories:
Cookies help us deliver our services. By using our services, you agree to our use of cookies.