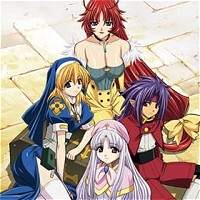 Chrono Crusade is a Manga started in 1998 by Daisuke Moriyama, which was later adapted into a 2003 Anime by Gonzo. The series was originally known as Chrno Crusade in Japan due to a typo (or so Moriyama says), but in a recent reissue of the volumes of the manga the missing "O" was restored to the title and highlighted by a flame on it to make sure it's noticeable. Both the manga and the anime were licensed by ADV Films in the US; Section 23, one of the company that came out of the ashes of ADV, had the distribution rights to the anime until late 2010 when FUNimation acquired the distribution rights. The manga is currently unlicensed and out-of-print since their manga branch has been completely dissolved. (So if you want to read this series and see the copies for sale somewhere, snatch them up. Or read a scanlation, but I didn't tell you that.) Section 23 has licensed the broadcast rights to the anime to Manga Entertainment, who is currently airing it on Syfy's Tuesday night Anime block alongside Tengen Toppa Gurren Lagann .

The storyline takes place in America during the 1920s and follows Rosette Christopher, a "gun-toting nun" and exorcist who works for the Magadalan Order, and her assistant, Chrono, a cute, chipper boy who is really a demon himself. Together, the pair aims to stop demons that would harm innocent people while searching for Rosette's missing brother, Joshua, who was kidnapped by White-Haired Pretty Boy Aion, a demon with ties to Chrono's past. Along the way they pick up Mysterious Waif Azmaria and Cool Big Sis Satella, and slowly begin to unravel the mysteries behind the powers of the children known as Apostles, and the plans Aion have for Joshua. Has nothing to do with the Square games Chrono Trigger and Chrono Cross. Not even if the original Japanese logo with overlapping "Cs" bears a striking resemblance to the aforementioned games', and if Crusade sounds like the next in the series after Trigger, Cross and Break.

It should be noted that the manga and anime for Chrono Crusade differ on some things - particularly the ending, which drastically changes depending on which version of the story you're seeing. Because of this, this page is divided into three sections: tropes that are universal for the series, and tropes that only fit the manga or anime.

Tropes used in Chrono Crusade include:

Applies across both versions

Retrieved from "https://allthetropes.org/w/index.php?title=Chrono_Crusade&oldid=1616862"
Categories:
Cookies help us deliver our services. By using our services, you agree to our use of cookies.