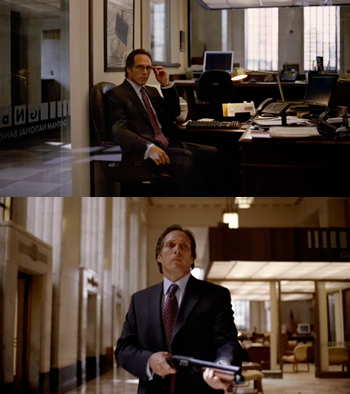 "Do you have any idea who you're stealing from?! You and your friends are dead!"

Movies, anime, cartoons, even books have an unspoken (or in some cases, explicitly stated) fighting power curve where the hero and villain are at or near the top. The Muggles and Innocent Bystanders? They're waaaay down there at the bottom, duh! Otherwise they wouldn't really be Innocent Bystanders in need of protecting, now would they?

Except for this guy. The Badass Bystander is a background or minor character who shows significant or surprising fighting prowess or strength against a major threat. Whether it's a doddering old man beating the DeathWalker 9000, going toe to claw with a werewolf, or purse-whacking the Giant Mook into submission.

Shows up frequently in martial arts movies, Western Barroom Brawls, and various Tabletop RPG's, in which random wandering monsters or random NPCs occasionally kick a PC's or villain's ass, depending on how the dice roll. NPC shopkeepers are pretty tough too.

This can result in Fridge Logic. Why aren't they helping you, The Only One who is trying to save the world? It's Up to You only. I guess.

Frequently done for comedy, with the Bystander being either Weak but Skilled or otherwise seemingly harmless. These minor characters Fighting for Survival may be so powerful they qualify as Sidekick Ex Machina's, with the hero "beating" their opponent by tossing him to the Badass Bystander to finish them off.

By their nature, plots involving Zombie Apocalypse tend to include Badass Bystanders—out of the normal civilians in harm's way, the only ones left standing are likely to be unusually badass.

This is a subtrope of Badass Normal, related to Heroic Bystander. See also Suddenly Always Knew That and Let's Get Dangerous. Often a resident of the World of Badass.

If you have a whole crowd of armed Badass Bystanders, you get Everyone Is Armed.

Examples of Badass Bystander include:

Retrieved from "https://allthetropes.org/w/index.php?title=Badass_Bystander&oldid=1906310"
Categories:
Cookies help us deliver our services. By using our services, you agree to our use of cookies.