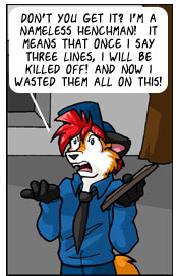 So you're watching a Horror show, slasher flic, or maybe an action show that promises a high body count. In order to prove just how high the stakes are and how willing the show is to be Darker and Edgier and scarier, it bravely advertises that Tonight Someone Dies! Not just anyone though, but someone on the poster!

So who dies? That's a tricky question. Kill the wrong person, or too early, and you risk angering the viewer. Execs and writers have, through time, trial, and (mostly) error, discovered that killing off "unpopular" minorities is safer than popular ones or majorities.

This has led many to notice patterns, a kind of Sorting Algorithm of Mortality, whereby a character's odds of gruesome, violent death are established relative to the rest of cast. The following is a rough generalization, some movies or shows might mix it up depending on which roles and traits a given character has, but few outright subvert or avert it, and when they do it's painful.

Compare Acceptable Targets. Once killed, see Sorting Algorithm of Deadness to see how likely they are to come back. See also Rule of Empathy.

To use the Sorting Algorithm of Mortality, simply add the Scream Score for each applicable row, then divide by as many rows (At this point, 14 or less). Remember: this is a relative score, so you need at least 3 or more characters from the same movie or series to establish a baseline. To keep this page clean, please put speculation on the mortality of a cast in the Wild Mass Guessing Sorting Algorithm of Mortality page.

In order to apply this to all of the characters from a work, the matching tropes are: