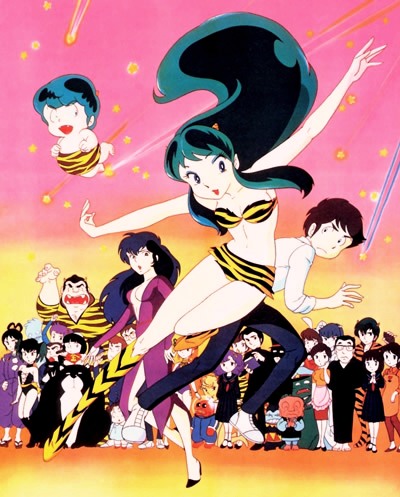 An early work by Rumiko Takahashi, Urusei Yatsura is often considered the original Magical Girlfriend parody, enough that the bumbling well-meaning Magical Girlfriend has become an archetype in its own right. The show's poster girl, a cutesy alien named Lum who habitually wears a tiger-striped bikini, is easily one of the most recognizable anime characters in history.

The show centers around Ataru Moroboshi, an Ordinary High School Student who happens to be both the unluckiest and most perverted man in the world, possibly the entire universe. He is chosen by lot to challenge a band of alien invaders in a game of tag to decide the fate of the Earth. His opponent: the lovely Princess Lum, daughter of the invaders' leader, Mister Invader. After several false starts, it takes a promise of marriage by his long-suffering girlfriend and childhood companion Shinobu to bolster him to victory. Unfortunately, after his triumphant declaration of "Now I can get married!", Lum thinks Ataru wants to marry her, falls instantly in love with him... and the rest is history. Lum moves in with her "Darling" Ataru, and before long, the district of Tomobiki has become a hotbed for intergalactic weirdness involving Lum's friends and relatives, with Ataru stuck in the middle.

Unlike most Unlucky Everydudes who were only Accidental Perverts, Ataru actually was an unrepentant pervert, and generally found his loyal "fiancee" to be little more than a hindrance to his more lecherous pursuits, though even he wasn't below the occasional Pet the Dog moments.

If Maison Ikkoku is the first Pretty Freeloaders-style comedy, UY is one of the earliest tongue-in-cheek harem comedies, combining its outlandish premise to spice up deceptively typical plots, as well as parody the genre nearly a decade before the fact. It even manages to invert the genre it helped create (instead of one low-key guy being chased by every girl in sight and in the end choosing one, it's about a perverted guy who chases every girl in sight... except for the one girl in the universe who can actually stand to be around him).

The manga ran weekly from 1978 to 1987. It spawned an TV anime that aired 196 episodes between 1981 and 1986, as well as 6 theatrical movies (4 produced during the anime's run, one shortly after it ended, and a tenth-anniversary movie, the unusually offbeat Always My Darling), and a dozen OVA's on top of that. The anime is notable for being the first major project helmed by acclaimed director Mamoru Oshii; indeed, the second film in this franchise, Beautiful Dreamer, is considered by many fans to be one of his finest.

Tropes used in Urusei Yatsura include:
Retrieved from "https://allthetropes.org/w/index.php?title=Urusei_Yatsura&oldid=1795304"
Categories:
Cookies help us deliver our services. By using our services, you agree to our use of cookies.