This page is about the Marvel Comics series. For the reality TV show, see The X Factor

X-Factor started as an X-Men spinoff in the 1980s, starting specifically in early 1986. Around that time, Xavier was heading into space to be with his love Lilandra, who just happened to be the Empress of the galactic Shi'ar Empire. They and the X-Men were on pretty good terms, particularly after they saved both the Empire and the Universe from the previous Shi'ar Emperor.

And, in addition to all that, it just so happened that Magneto was recently trying to turn a new leaf. Oh, and it also just so happened... that Jean Grey had not died a few years before. And finally, Beast, Angel, and Iceman had recently joined a a brand spankin' new version of The Defenders. This didn't last long, and it ended with everyone except for the aforementioned three being killed off. They got better. So now, those three characters were free game for other projects.

So... here's what all of this resulted in; Charles Xavier decided to go into space to be with Lilandra, and put the recently reformed Magneto in charge, in his stead. However, Cyclops had a problem with that, what with, you know... Magneto previously being the X-Men's deadly Arch Enemy and all. So, Cyclops reunited with Iceman, Angel, The Beast, and Jean Grey, after learning of how she was now alive again. The group dedicated themselves to continuing Charles Xavier's dream.

...And if you want even more details, just go to Wikipedia.

After they rejoined the expanded team of X-Men, the title shifted to a new, government-sanctioned team of mutants, most notable turning for C-List Fodder like Jamie Madrox into Ascended Extras. That series was cancelled in 1998, and seven years later Marvel launched a new series with Madrox as the lead character, where most of the old team and some new members become private investigators.

Technically, there have been two X-Factor series so far: one about the mutant superhero team, which started in 1986, and one about the mutant detective team, which started in 2006. However, after Peter David took over the original series, the roster and style of the series was so different from what came before it that it was basically a separate series. So this page refers to three separate X-Factor series, meaning the original, starring the five original X-Men as mutants pretending to be Cape Busters; the second era of that same title, which began with PAD taking over and continued with several other writers, starring C-List Fodder as mutants openly working for the government; and the new series, also written by PAD but with an adversarial relationship with the government and more Film Noir elements than most superhero comics.

Has nothing to do with the ITV reality series.

Tropes used in X-Factor (comics) include:

The first series contains examples of: 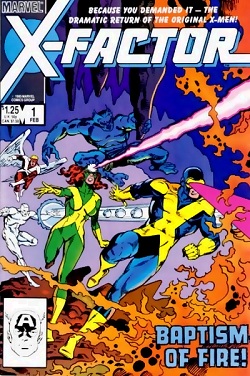 The second series contains examples of: 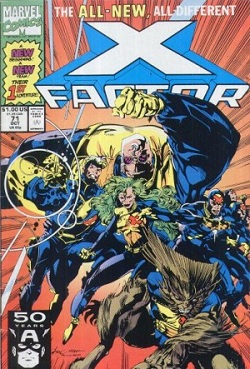 Welcome to the Nineties...

The third series contains examples of: 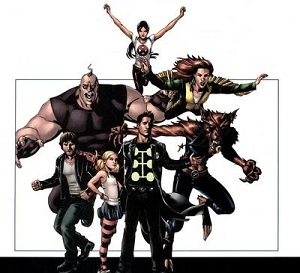 Re-tooled Nineties as gritty noir.
Retrieved from "https://allthetropes.org/w/index.php?title=X-Factor_(comics)&oldid=1727676"
Categories:
Cookies help us deliver our services. By using our services, you agree to our use of cookies.