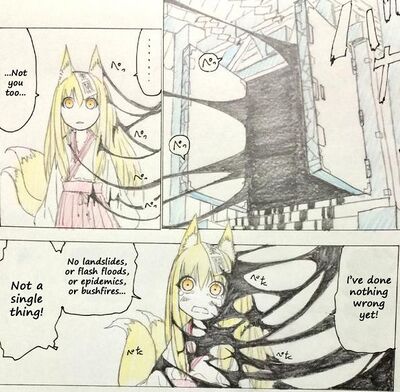 Betrayal from the ones you love hurts.
That "yet" is concerning though. And she was probably behind the hero's girlfriend getting sick

So, there's a villain. Right. Murdering, world-conquering type. The series is ending, so it's time to get rid of him. So he goes out with...a final touching quote and a One-Woman Wail?

As odd as it may seem, if you want the audience to feel sorry for a villain, a good death scene is probably the way to go. This works best if you know their Freudian Excuse; Chaotic Stupid need not apply for this sort of thing. Also works best if this is a supporting villain. We're not supposed to like the Evil Overlord, but we can identify with The Dragon, and especially the Quirky Miniboss Squad, over time and may be sad to see them go. If a Fallen Hero dies, expect everyone to weep openly.

Note that performing one of these incorrectly feels like a cop-out, and usually results in a variation of Karma Houdini. A few well-chosen Last Words are often used to create this feeling.

The villain doesn't need to die for this trope to fit, at least they must undergo a downfall.

Subtrope of Cry for the Devil. Compare What a Senseless Waste of Human Life, Antagonist in Mourning, and Death Equals Redemption.

Examples of Alas, Poor Villain include:

Retrieved from "https://allthetropes.org/w/index.php?title=Alas,_Poor_Villain&oldid=1920553"
Categories:
Cookies help us deliver our services. By using our services, you agree to our use of cookies.