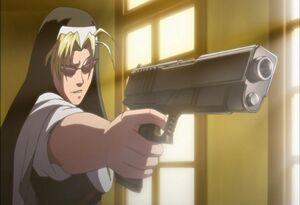 If you have any last words, just be aware that nuns are not qualified to administer last rites.

One would hope that most members of a Noble Profession, though human and prone to imperfection, are decent folk who make an honest effort to uphold the basic moral and ethical standards one might associate with the position.

And then there's this character.

She's a nun, at least that's what it says on her job resume. However, she acts nothing like what she's claiming to be. Instead, she can be violent, destructive, steal from the collection plate, wear revealing clothing, be perverted like the best of them, forget all about her chastity vows, take God's name in vain and swear so much she'd make a sailor cry, not to mention that she seems to have ideas or notions that directly contradict the Church she belongs to. In other words, she's anything but the normal image of a member of the Church you'd expect. It leads one to wonder how she managed to land this job in the first place. Like the Bunny Ears Lawyer, It is possible that she's actually good at parts of her job... once you bypass all the rest of the stuff she does.

One of three things usually occur.

The character's reasons for being the way they are may vary:

Of course, you have to take into consideration the actual setting. If everyone is dressed like Naughty Nuns in the Church, then simply wearing a sexy nun outfit isn't enough to be Nun-Too-Holy.

This trope can apply to any member of the religious orders, not just nuns, or indeed any character whose nominal role is that of a holy person, moral leader, etc.

For characters who take their role as a moral leader too seriously rather than not seriously enough, see Knight Templar or Well-Intentioned Extremist.

If the character is sincere but mistreats those they are supposed to cater too, they may be a Jerkass Woobie.

Much less Truth in Television than it used to be. Convents in the Middle Ages were used as dumping grounds for unruly noblewomen, who made equally unruly nuns and possibly the Trope Maker for Naughty Nuns.

Retrieved from "https://allthetropes.org/w/index.php?title=Nun-Too-Holy&oldid=1727913"
Categories:
Cookies help us deliver our services. By using our services, you agree to our use of cookies.