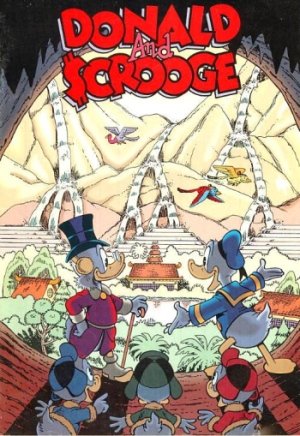 Named after The Lost World by Sir Arthur Conan Doyle, this is, naturally, a geographic location off all maps.

They are usually found in remote locations, such as the center of large and barely explored continents (usually Darkest Africa), the polar ice caps, or mysterious islands. They are often home to lost civilizations with amazing Lost Technology, or to prehistoric animals that have managed to survive unchanged—aside from the fact that they suddenly find humans delicious. Some Lost Worlds are almost ludicrously dangerous and populated by fearsome monsters, and still others are Magical Lands where All Myths Are True. Prone to being destroyed by volcanic eruptions, floods, quakes, and/or bombs at the end of the book/film/series, with the protagonists barely escaping.

No longer popular (or even credible) with the advent of satellite mapping and GPS. Most modern fictions that use this trope are set in the pre-satellite past. The Lost World has now been adapted to serve in even more mysterious places, such as outer space or deep underground. You are now much more likely to see a civilization thought long dead on an episode of Star Trek than on your modern action show.

Applied Phlebotinum is sometimes used to explain why the area has stayed lost into the modern era; it's contained in a Pocket Dimension, or was created by aliens as a nature preserve, or some such Hand Wave. Occasionally treated more seriously, as a venue for playing with alternate evolutionary pathways.

It's worth knowing that some elements of this have happened in Real Life, even recently. However, they certainly don't match the scale of a true Lost World. For example, you might have a tribe that has had no interaction with the outside world for hundreds of years, but not, say, an entire civilization.

Two frequent lost worlds are the Deserted Island and (in older works) Mysterious Antarctica. Often a key element in a Jungle Opera.

Examples of Lost World include:

Retrieved from "https://allthetropes.org/w/index.php?title=Lost_World&oldid=1584530"
Categories:
Cookies help us deliver our services. By using our services, you agree to our use of cookies.