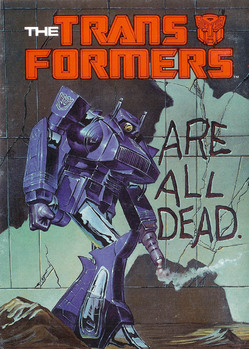 This is beyond the loss of a Red Shirt, or even a Redshirt Army. Sometimes, to show that a situation is really, really dire, the main character and his friends have to look around and see that everybody except themselves is dead.

The guy who appeared in that one scene to offer advice, dead. Captain Ethnic, dead. The Ace, the Ideal Hero, the Badass Normal? Dead, all of them. Wait, what about that Nigh Invulnerable guy? In the end, even he was mortal. Sure, life might be going on elsewhere. Greece was still populated when Odysseus lost his crew. But for the person who survived, everyone is gone—they are alone. For now, at least. Maybe, though, there really are no people left and you are officially After the End—the last group of survivors. Have fun with a lifetime of isolation!

When used to conclude a story, the idea is a tragic ending, but still allows the main characters to move on to the next adventure and try harder next time. When used as a story setup, expect the sole survivor to cope with Survivors Guilt.

Can be an outcome of necessity to Bring News Back, with the messenger alone surviving. A common subversion is that the whole event is part of some nefarious scheme to get a hero's cooperation, and no one is actually dead. And sometimes this is the prologue to a Ghost Ship story. If the main characters themselves start dying off, it's a Dwindling Party.

See also: Ten Little Murder Victims, Last of His Kind, Last Starfighter, Dwindling Party and Only the Leads Get a Happy Ending. Compare and contrast: Total Party Kill, Kill'Em All, and Everybody Lives. Compare Party Scattering, where the same feeling of abandonment is invoked for each main character separately, but without any of them dying.

Examples of Everybody's Dead, Dave include:

"Wait a minute... are you trying to tell me everybody's dead?!"

I never should have let him on this page in the first place.

Retrieved from "https://allthetropes.org/w/index.php?title=Everybody%27s_Dead,_Dave&oldid=1897435"
Categories:
Cookies help us deliver our services. By using our services, you agree to our use of cookies.