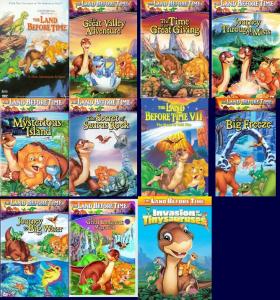 There've been three more since this image was made.[when?][1]

As the number of films in a series swells, the probability of an entry that is unmitigated crap jumps to a number greater than 50% with the second instalment, and approaches 100% thereafter. For example, a successful film has a sequel that is decent but nothing compared to the original film. Suddenly a third movie appears and is may not even be produced or directed by the same people as the other two. If there are any more sequels, it just goes downhill from there if none of them are entertaining.

Sequels to movies, generally unplanned ones (as opposed to a planned trilogy for example) and created on the impetus of box office revenue (Roger Ebert, in his Bigger Little Movie Glossary, defines "sequel" as "a filmed deal"), are rarely as good as the movie they're a sequel to. If there is a third instalment, it will frequently mark a sharp downhill turn even when the second movie turned out all right. And even if there's a good trilogy, going beyond that has an even greater chance of crap.

Note, however, that this only applies to unplanned sequels. Numerous examples exist of planned sequels which have been extremely good. It can also happen in the case of unplanned sequels (Ghostbusters 2 comes to mind as a sequel that, while perhaps not stellar, at least wasn't completely horrible) as well; it's just a lot more rare in that case, as noted above.

Common symptoms of Sequelitis (that is, things which contribute to a sequel not being as well received as the original) include, but are not limited to:

Do note also that Sequelitis can and does incorporate several of these types at once.

The format of the sequel also enters the equation. If it's a Direct to Video sequel, chances are high that it sucks. After all, a lot of people assume a Direct-to-Video sequel is a movie that wasn't good enough to become a box office failure in theaters.

The dreadful compulsion on the part of writers and filmmakers to add new chapters to perfectly good works has been likened to an addiction, sometimes termed sequelholism. The writers sometimes seem aware of this, and as a run of sequels are produced they may drop numbering the movies entirely and start adding cliché subtitles. This only makes it harder to guess the order to watch for new fans. If they aren't aware of this, then, in the end, odds are First Installment Wins.

The inverse is a Surprisingly Improved Sequel or Even Better Sequel (depending on the quality of the original). Contested Sequel is when there is considerable division about the sequel's quality. Distantly related to Adaptation Decay. For a strangely divergent sequel, see In Name Only. For a sequel that retains the monster or villain but features none of the original heroes, see Villain Based Franchise. Can be caused by a poor choice in Sequel Escalation, and lead up to Franchise Zombie. Backlash against sequels has made many reviewers Sequelphobic. Some fans treat such sequels with Fanon Discontinuity. See also Sophomore Slump, The Problem with Licensed Games.

Examples of Sequelitis include:

Retrieved from "https://allthetropes.org/w/index.php?title=Sequelitis&oldid=1876155"
Categories:
Cookies help us deliver our services. By using our services, you agree to our use of cookies.