Somewhere a Palaeontologist Is Crying 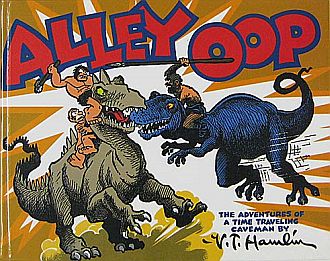 He's got a chauffeur who's a genuine dinosaur.

In Real Life, a wide variety of dinosaurs walked the Earth over a period of about 180 million years. Most of them evolved from other dinosaurs and, naturally, when a given dinosaur was walking around, its ancestors were most likely extinct. Also, just like modern animals, different dinosaurs lived in different areas and habitats.

However, many writers don't care about this. Since dinosaurs are inherently cool, any story featuring them will probably have a selection of the most popular dinosaurs, regardless of different habitats or the fact that some went extinct well before others evolved and even those who lived in the same time period, were often located at different parts of the world. Other prehistoric creatures tend to be identified as dinosaurs even if they aren't, such as pterosaurs (closely related to dinosaurs but not true dinosaurs), marine reptiles (reptiles but not dinosaurs), Ice Age mammals such as mammoths and sabre-tooth cat (mammals that didn't come until long after the dinosuars were extinct), and Dimetrodon (more closely related to mammals than to dinosaurs, and long predates true dinosaurs).

If the dinosaur extinction is ever even mentioned, expect it to be shown as an instantaneous cataclysm, despite the fact that their extinction would seem, by our standards, a drawn-out process. Even something as dramatic as a giant asteroid slamming into the Yucatan wouldn't kill off the dinosaurs instantly. Rather, it would start a chain reaction that would gradually kill them off over time. This could be due to confusion on the part of those who do research it—for example, some scientists have referred to the extinction of dinosaurs as geologically instantaneous... which means a couple of hundred thousand years--or a full twenty times longer than the entirety of recorded human history. Geologic time is significantly slower than most people can comfortably comprehend. The dinosaurs may also interact with monkeys, dodos, or even humans, despite the millions of years separating them. Often, cavemen will be co-existing with dinosaurs, despite the absence of any evidence that dinosaurs and humans ever lived together. (Maybe we just need humans in fiction to identify with.)

Note that even well-researched depictions can fall victim to new discoveries; until very recently, no one had any idea that diplodocids had spines along their back, for instance, overturning more than a century of sauropod depictions. Similarly, only quite recently was it proven that dromaeosaurids (better known as "raptors", after the most famous member of the family) and other small dinosaurs were covered in feathers.

In any case, one may begin to suspect that, in fact, the only "research" some dinosaur fiction creators did was... watching other dinosaur movies. Goes hand-in-hand with Stock Dinosaurs, where only the popular species of dinosaurs (or "dinosaurs") show up. And with Prehistoric Monster as well, where dinosaurs are always portrayed as non-cute things regardless how they looked in Real Life. One Egregious subtrope overlapping with Special Effect Failure is the Slurpasaur.

Examples of Somewhere a Palaeontologist Is Crying include:

However, the series actually takes place in the 8th Century, in an Alternate Universe that outpaces our own technological development by a millenium and change. So it's also just as likely that dinosaurs didn't die off to begin with.

Retrieved from "https://allthetropes.org/w/index.php?title=Somewhere_a_Palaeontologist_Is_Crying&oldid=1809176"
Categories:
Cookies help us deliver our services. By using our services, you agree to our use of cookies.