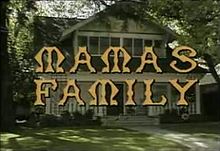 Mama's Family was a Sitcom that aired on NBC from 1983 to 1984 and in first-run Syndication from 1986 to 1990. It was a spin-off of a recurring sketch called "The Family" on The Carol Burnett Show, which was adapted into a prime time special "Eunice" for CBS before being turned into a TV series.

The show was about Thelma Harper (née Crowley) ("Mama") and her family: Thelma's son Vinton and his girlfriend (later his wife), Naomi; Vinton Harper Jr. ("Buzz") and Sonja, Vinton's two kids from a previous marriage; and Francis Crowley ("Aunt Fran"), Thelma's sister, all lived in the house with her. Her daughters Ellen and Eunice visited frequently, along with Eunice's husband, Ed. By the syndicated episodes, this had been narrowed down to Vinton and Naomi and Thelma's fresh-out-of-Juvie grandson Bubba. Also added was nosy neighbor Iola.

The show revolves around the family's lives and is an example of a Dom Com.

Tropes used in Mama's Family include:

Mr. Babcock (businessman): Hey madam! Ma'am! Let me walk you out.
Mr. Potts (dealer): Hey, wait a minute Mr. Babcock, you said if I was to give her a refund that you'd sign the papers!
Mr. Babcock: I lied.

Mama: Your idea of exercise includes a man, a bed, and a cigarette afterward!
Naomi: That is a total lie! I have never smoked a cigarette in my life!

Vint: Mama, you've got everything out here but the kitchen sink!
Iola: (brings out kitchen sink) All right, Thelma, where do you want it?

Thelma: I ain't gonna be able to sit in there again!

Thelma: (slowly and accusingly) Eugene...?
—Eugene: I didn't put anything in that stew!

Vinton (to Naomi): "I promise to stay together with you for as long as we both shall think it's a good idea."

Thelma: I was making booties before you had feet!