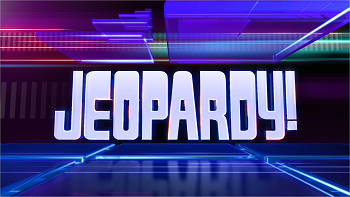 Merv Griffin created this quiz show in 1963 when his wife, Julann, suggested (in a reaction to the quiz show scandals still in recent memory) that he reverse the trivia format — Give the contestants the answers and have them provide the questions. He pitched it to NBC as What's the Question?, but was told that the game needed "more jeopardies". Jeopardy! debuted on NBC in 1964 with Art Fleming as host and Don Pardo as announcer. It ran until January 1975, with a brief revival in 1978-1979 (also hosted by Fleming, but announced by John Harlan) that had drastically altered rules.

After two pilots, Jeopardy! came back in 1984 with host Alex Trebek, current announcer Johnny Gilbert and much higher cash totals. This version has far outlasted the original, with its 28th season starting in September 2011. Other than a few cosmetic changes and the doubling of dollar amounts, the format is almost entirely unchanged. Alex Trebek has passed away as of November 8th, 2020.

Three Spin-Offs have aired over time. In Summer 1990, ABC aired a 13-episode tournament of champions titled Super Jeopardy!, which was paired with another one of Griffin's creations, a game show version of Monopoly. GSN also ran a children's version called Jep! from 1998 to 2000, and VH-1 created a rock music-themed version called Rock & Roll Jeopardy!, which aired from 1998 to 2001.

It should be noted that the A&Q concept isn't original, as it had already been done in 1941-42 with Gil Fates' CBS Television Quiz.

These tropes took their names from Jeopardy!, making the show a Trope Namer.

Here are your categories:
I'll take Tropes for $200, Alex:
Retrieved from "https://allthetropes.org/w/index.php?title=Jeopardy!&oldid=1845157"
Categories: