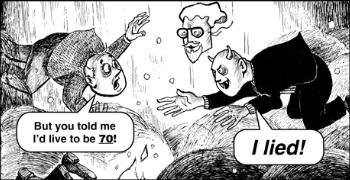 Stock Phrase uttered in response to You Said You Would Let Them Go or a similar expression of shock at a broken promise of lenience or forgiveness. Spoken by the villain (or a particularly unmerciful hero) just before killing the hostage, blowing up the Doomed Hometown, using the Doomsday Device, or some other act of merciless badness. Sometimes spoken just after, with a smirk and a smoking gun.

Generally speaking, anyone who says this is lining up that puppy between the goal posts or even about to perform their defining act of depravity and has, in any case, revealed their cruelest colors. Expect them to rub it in with Evil Gloating, asking the heroes "Did you actually believe me when I said..."

For some reason, this often seems to take the heroes by surprise, even when the speaker has an extensive history of villainy. This is most likely because, as we all know, Villains Never Lie.

Sometimes used by a former bad guy who's made a Heel Face Turn - made the offer to rejoin Team Evil, they calmly accept, or perhaps pretend to seriously contemplate the offer, shocking any listening heroes, and about three seconds later proceed to kick ass on the side of good, taking everybody by surprise. The bad guy looks up at them and protests, "You said you're on our side!" The former bad guy says, "Yeah. I lied."

Usually said with dripping irony, which tends to fall a little flat if the speaker doesn't at least put a new spin on the phrase. Contrast Empty Promise and Villains Never Lie

Examples of I Lied include:

Some time after the quote, he got a bill that would have fulfilled one of his other promises, but would've increased taxes. He was forced to break one or the other, and either choice would've cost him the re-election. Nevertheless, any politician worth his salt should realize that he can't know what crisis might occur during his or her term of service, let alone what steps might be necessary to resolve it. A promise as grand as "no new taxes" is unreasonable, and a politician who makes such a promise is playing on the voters' naivete. It may not be strictly malicious, but it's disingenuous to call it anything other than a lie.

Retrieved from "https://allthetropes.org/w/index.php?title=I_Lied&oldid=1927124"
Categories:
Cookies help us deliver our services. By using our services, you agree to our use of cookies.