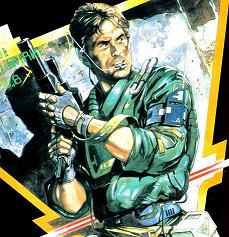 This is Solid Snake! Your reply please...

OUTER HEAVEN is the name of heavily armed land in the depth of southern Africa where the dreadful weapon called METAL GEAR is developed. It is the mission of SOLID SNAKE, one of the members of secret army 'FOX HOUND' to sneak into OUTER HEAVEN and destroy METAL GEAR. GO AHEAD SOLID SNAKE!
—Game description from the MSX2 version.

The very first installment in the Metal Gear series. Released in 1987 for the MSX2 computer platform in Japan and Europe, the original Metal Gear is considered to be one of the earliest examples of the stealth action game genre (though, Castle Wolfenstein for DOS predates Metal Gear by a good six years), as well as the first game ever released designed by Hideo Kojima.

The game came into existence when Kojima's superiors, enamored with the Capcom arcade game Commando and noticing its success, asked him to create a "Commando-like" game for the MSX2. However, Kojima quickly discovered that a fast-paced action game would be impossible on the MSX2 hardware, thanks to the system's own hardware limitations that limited the number of sprites that could be grouped together on the same horizontal plane before the sprites would start flickering (a hardware limitation that the MSX2 shared with the Nintendo Entertainment System, and which many old-school NES players are familiar with). Kojima then decided to retool the game around avoiding combat instead, and decided to base the game around stealth and infiltration to give it at least a hint of a "Rambo-like" feel.

While it did not achieve the same mainstream success that its later sequel Metal Gear Solid did, it sold well enough on the MSX2 for Konami to consider porting the game to the Family Computer and its overseas counterpart, the Nintendo Entertainment System. For most mainstream players, especially those living in America (where the MSX2 was never released), the NES version was their first exposure to the franchise prior to the later Metal Gear Solid titles. The NES version, despite making several changes to the game that led to it being disowned by Kojima, as well as having one of the most questionable English localizations ever produced, was a surprise success and made the development of the sequels possible. Thankfully, the original MSX2 game and its sequel were eventually bundled together with Metal Gear Solid 3: Snake Eater: Subsistence, finally exposing the origins of the Metal Gear series to American fans, and with a new and improved translation to boot.

The plot is considerably more straightforward than later Metal Gear games. A heavily armored fortress nation known as Outer Heaven emerges, employing powerful mercenaries led by an unknown leader. Shortly after Gray Fox, one of the most skilled members of special forces unit FOXHOUND, goes in to investigate, he vanishes, his final message being a cryptic reference to Metal Gear, Outer Heaven's super weapon. As Solid Snake, the newest member of FOXHOUND, your mission is to infiltrate Outer Heaven, rescue Gray Fox, uncover the mystery behind Metal Gear, and destroy it.

The original Metal Gear was followed by two separately-made sequels, both released in 1990 and each taking the story to a different direction: Snake's Revenge for the NES, which saw a release in America and Europe, and Metal Gear 2: Solid Snake for the MSX2, released exclusively in Japan until later re-releases. The Metal Gear Solid games follows the continuity from Metal Gear 2, rendering Snake's Revenge into Canon Discontinuity status.