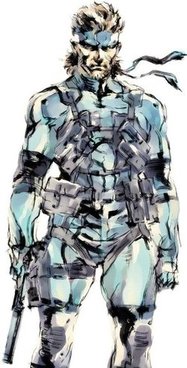 Not pictured: cigarettes and cardboard boxes.

The Metal Gear series, created by Hideo Kojima in 1987, is the Trope Maker and Trope Codifier of the Stealth Based Game genre. The idea came when Kojima realized that the MSX2 couldn't show more than a few enemies at a time without flashing epileptically and generally breaking - so why not make a game where avoiding your enemies is the theme? This concept received a lot of criticism - one famous quote from Kojima's boss is, "Hiding from your enemies? That's not a game!". But then they started playing it. And it became quite a hit, spawning a great many sequels (with countless ports and editions):

Plus a bunch of spin-offs:

The chronological order of the series is:

The plot is far too complicated (and occasionally batshit crazy) to write here in any detail beyond the vaguest - besides, it would spoil it all - but the general plot centres around the main character, Solid Snake, his family and the titular Metal Gears - walking battle tanks capable of launching nuclear strikes from anywhere in the globe.

The series loves breaking the fourth wall and has a distinct quirky sense of humor - running jokes involve the iconic use of a cardboard box to sneak around a base (wait until he's not looking, run to a new location, and repeat). Hideo Kojima's irreverence is such that he's been trying to kill the series off since Metal Gear Solid 2 made its protagonist switch, so he can get on with more interesting things, but a rabidly devoted fanbase simply won't let him.

One of the most engaging parts of the games is the huge focus on multiple uses for items. For example, the cigarettes, while they seem like a pointless gag item, the player soon discovers that by equipping them they can see laser beams with the smoke, although they suffer a cost as the cigarettes sap their health little by little. They also calm the main character's nerves, making him aim straighter. If that isn't enough, there's always at least one character who will gives the player a long lecture about the dangers of smoking if you contact them.

Following the initial Metal Gear, each game has been a Deconstruction of action movies and video games, playing tropes so painfully straight they curve right back in on themselves. Very few tropes are invoked without logically following them through, especially those of spy movies - we see exactly what kind of mind and complete control of a situation would be needed to pull off the absurdly complex Gambit Roulettes that happen once per game, exactly what happens to a Tyke Bomb forced to take up a normal life, and there's a female on male sexual abuse subplot which is not at all okay, to name just a handful.

Solid Snake began as a Deconstruction of the Badass trope, as his wartime experiences had not turned him into the ultimate action hero, but into a bitter, broken-down wreck of a soldier who just wanted to retire but could not escape the life of conflict that had entwined him for so long. After fans missed the point slightly, this theme was hammered home with Raiden, who was put through the same torments as Snake in explicit detail. Not even Big Boss is immune to this theme: as Naked Snake, he's not the suave, impeccable agent that would fit perfectly into the '70s spy film pastiche of Metal Gear Solid 3, but a likable, kinda-dorky (though admittedly brilliant at what he does) everyguy. Only after going through immense psychological and physical scarring does he begin to resemble the ultimate soldier known as Big Boss.

The series is acclaimed for a lot of good reasons - stellar gameplay, very complex plots with pitch perfect Deconstructions, excellent direction, intelligent character development and weird stylized dialogue. Just prepare for a lot of cutscenes. I mean, a lot of cutscenes. No, more than that. Honestly, you play the game for two-fifths of the time, watch a full-length movie the other three-fifths. If you like the plot, though, you'll probably love the cutscenes.

Currently the latest game in the series is yet another spinoff: Metal Gear Rising: Revengeance, featuring Raiden, who has certainly been Rescued from the Scrappy Heap. Which will take a huge detour from the stealthy origins of the series, and instead become a pure (an very over-the-top) action game. In addition, a new site on Kojima Productions was uploaded that is recruiting new engineers for a new Metal Gear game that is strongly implied to involve Big Boss as well as a dog.

There is also The Last Days of Foxhound, a webcomic based off Metal Gear Solid which parodies certain aspects of the games as well as discussing some questions that were unanswered before Metal Gear Solid 4, as well as another webcomic titled The Cobra Days chronicling the World War II adventures of a similar Quirky Miniboss Squad from Metal Gear Solid 3, and hiimdaisy's Affectionate Parody comic series "Let's Destroy the..."

Please do not dump tropes that only apply to specific games on this page; put them on the appropriate pages or on the character page. This page is for tropes that appear several times throughout the series.

The following tropes are common to many or all entries in the Metal Gear franchise.
For tropes specific to individual installments, visit their respective work pages.

Retrieved from "https://allthetropes.org/w/index.php?title=Metal_Gear&oldid=1681851"
Categories:
Cookies help us deliver our services. By using our services, you agree to our use of cookies.