Everything About Fiction You Never Wanted to Know.
Jump to navigation Jump to search
/wiki/Hideo Kojimacreator 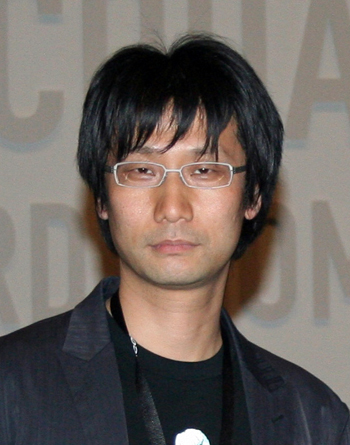 Hideo Kojima (August 24, 1963) is best known as the creative mind behind Konami's Metal Gear series. He also directed Snatcher, Policenauts, Castlevania: Lords of Shadow and the Tokimeki Memorial Drama Series, and is the producer of the Zone of the Enders and Boktai series.

His games have a cerebral element, often playing with the fourth wall. Expect to see giant robots, discussions on the nature of love, discussions on the nature of war, and shameless references to the media - primarily American movies, of which he is a huge fan. His games often glorify, deconstruct, reference or pastiche Hollywood tropes - and it can be anything from Theme Naming his cast after movie characters to copying an action sequence motion-for-motion.

He's also hell-bent on giving his games an excruciating level of world detail and interactivity, claiming that "if the player doesn't believe the world is real, there's no point in making the game". As a direct result, his games are littered with subtle touches that other developers would barely even think of, some even being so obtuse as to qualify as outright easter eggs, starting with an absolutely gigantic in-game encyclopedia detailing the world of Snatcher, and carrying on throughout the Metal Gear series.

Kojima has a very strange relationship with his fans, in that, despite his respect for them, he constantly makes fun of them and says things to deliberately infuriate them. The whole of Metal Gear Solid 2: Sons of Liberty, to take the most notorious example, was an extended parody of sequels and fan's expectations thereof, constantly teasing the player by seeming to be more of the same and then going off in completely the other direction. It was also influenced by Paul Auster's classic postmodern metadetective New York Trilogy, of all things.

Metal Gear Solid 3: Snake Eater, on the other hand, is a pastiche of '60s spy flicks, from its distinctly James Bond-esque title theme and Cold War setting to the presence of a "Bond Girl" ("Snake Girl?") in the form of motorcycle-riding EVA.

His games also have a knack for unpredictability, showcasing features and plot twists that players could never have predicted - most egregiously replacing Snake with Raiden as the protagonist of Metal Gear Solid 2: Sons of Liberty with absolutely no prior information leading up to the revelation. To this end, he goes out of his way to make deliberately misleading trailers for his games, so as not to give away the twists. Indeed, said trailers often don't have anything to do with the game at all, beyond prominently featuring the main character (or maybe not) and showcasing one or two new game features.

It's notable that the only time he has dropped his polite, cheerful public persona was when he was asked whether Uwe Boll would be directing a Metal Gear Solid movie as he claimed, at which point he blew up and called Boll a "talentless hack". Needless to say, many people were freaked out by this sudden outburst, and even more freaked out when he immediately became calm and serene again afterward.

Apparently has been quite hooked on Left 4 Dead and has joked about "quitting being Japanese", to the extent where he has openly invited western game developers to co-operate with him so that they can find a best-of-both-worlds approach to making video games, combining aspects of western technology-centric and eastern design-centric game design. Recently, it has been revealed that his most anticipated game of 2011 is LA Noire, highlighting this sentiment.

Also appears to be a Twilight fan. Make of that what you will. Then again...

He has directed the following games:

He has also been involved in the production of:

Tropes he has personally stated he despises:

Some films that have inspired his work:

Some other things he is known to admire:

Retrieved from "https://allthetropes.org/w/index.php?title=Hideo_Kojima&oldid=1545618"
Categories:
Cookies help us deliver our services. By using our services, you agree to our use of cookies.