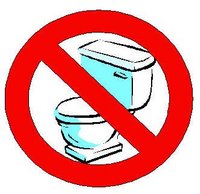 You know that children's book, Everyone Poops? Well, they lied. Not everyone does.

Sure, real people and animals in everyday life might, but you're not likely to see a fictional character going to the bathroom. This would detract from the plotline, and besides, nobody really wants to see that sort of thing. If something's not crucial to the story, why include it? If the story does mention the subject, it will be for something related to the story, such as a Potty Emergency, or it may be for the sake of Toilet Humor. This is sometimes averted without showing anything by simply having a character excusing themselves for a moment.

The page lists lampshades of the phenomenon; straight examples and aversions are too many to count.

Even the dead aren't immune to this trope, as evidenced in the subtrope No Dead Body Poops.

Examples of Nobody Poops include:

Retrieved from "https://allthetropes.org/w/index.php?title=Nobody_Poops&oldid=1956016"
Categories:
Cookies help us deliver our services. By using our services, you agree to our use of cookies.