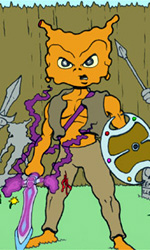 It's the shield you have to worry about.

Goblins: Life Through Their Eyes is a webcomic written, penciled, and colored by Tarol Hunt, nicknamed Thunt, following the adventures of a band of, well, goblins, as they fight off evil adventurers. It's a role reversal of the typical adventure RPG Dungeons & Dragons, though familiarity with the game isn't required to understand what's happening.

The main story follows five members of a cannon-fodder goblin tribe (Thaco, Chief, Big-Ears, Complains-of-Names, and Fumbles) who decide to stop being cannon fodder and become Player Characters. A side plot follows a sixth goblin (Dies-Horribly) who goes on a solo adventure arc quite against his will. It features detailed world-building (including quite a few whole-cloth, background creatures with detailed biologies) and characterization, particularly of the villains. One of the goblin characters, Big-Ears, is a rare instance of a truly gentle, heroic and noble paladin, while the paladin status of the most opaque and brutal villain, Kore, thus far is one of the most foreboding mysteries.

The comic doesn't give its characters very long to get used to their newfound abilities as heroes. Goblins thrusts its main characters in over their heads almost immediately, locks them into a course of action they can't possibly handle, and then calls into play a series of oddities, Deus Ex Machina, coincidences, character-driven actions, more Deus Ex Machina, and Chekhov's Guns that collectively get the heroes into a position where they might possibly be able to escape their impossible predicament. Because it didn't seem like they'd get into this much danger this quickly, the story instantly became edge-of-your-seat reading.

The site also hosts a sub-comic, Tempts Fate, about a lone goblin adventurer facing various dangers each comic. This part is Thunt's donation scheme and thus, people would have to stop supporting Thunt's artistic endeavors to kill Tempts Fate off. So far, he's survived every death trap.

For the completely unrelated computer game, see Gobliiins. For goblins in general, see Our Goblins Are Wickeder.

Tropes used in Goblins include: