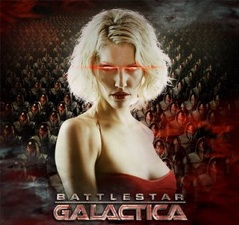 In 2003, the Sci-Fi Channel revived the classic 1970s space opera series in a four-hour miniseries, followed in 2005 by a regular series which ran four seasons before concluding in 2009. The new program, considerably darker and more adult-themed than the original, discarded the original series continuity and retooled many of the main characters while keeping many of the original show's themes and technology. Despite initial protests from fans of the original series (including original series star Richard Hatch, who had long hoped to relaunch the series and reprise his role as Apollo), the new series quickly became one of the most popular programs in Sci-Fi's history. Even Hatch eventually changed his tune, joining the show's cast as political dissident Tom Zarek.

The 2000s series picks up forty years after the end of the first war between the humans and Cylons, in this continuity sentient machines created as soldiers by the human race. As the story begins, the Cylons, now led by a group of artificial humans, launch a surprise nuclear attack that obliterates almost the entire human race. Like the original series, the survivors form a fleet led by Galactica in search of the lost thirteenth colony, Earth, with the subversion that whether Earth even exists or not is completely unknown to the fleet. Religious symbolism and revelation play a great role in the new series, as the fleet follow signs and omens that may lead them to Earth while wondering whether or not they're just wasting their time. The polytheistic religion of the humans, based on classical Greek/Roman mythology, also comes into conflict with the monotheistic, vaguely Christian faith of the humanoid Cylons, with the occasional dropped hint that both groups are receiving revelation from the same source.

The new series has been favorably compared to Babylon 5 and Firefly for its character-driven storylines and for attempting to portray space physics in a realistic manner despite the occasional excess. It has even been the subject of a panel discussion at the UN.

The newer series avoided some obvious space opera cliches (such as Space Clothes, Teleporters and Transporters, Lasers, even communicators).

There was also a Made for TV Movie called Battlestar Galactica: The Plan that told the story of the destruction of the colonies from the point of view of the Cylons. It features original material and scenes from the series. It was directed by Edward James Olmos and came out in 2009.

Caprica, a Prequel set 58 years before the events of the Mini-Series, portrays life in the Twelve Colonies and shows the story behind the creation of the Cylons. It premiered in January 2010, and was cancelled after just one season. There is also a movie or movie-length event planned for 2012, called Battlestar Galactica: Blood & Chrome, that might serve as a backdoor pilot for yet another series.

There is also a browser-based spaceflight action MMO based on the series, Battlestar Galactica Online, set in an AU where a jump accident pre-New Caprica sends both Colonials and Cylons into uncharted space filled with the leftovers of mysterious precursors.

Notable trope-based episodes in the remake include:

Retrieved from "https://allthetropes.org/w/index.php?title=Battlestar_Galactica_(2004_TV_series)&oldid=1960032"
Categories:
Cookies help us deliver our services. By using our services, you agree to our use of cookies.