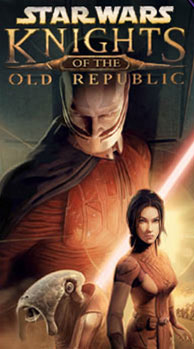 A 2003 RPG developed by BioWare, set in the Star Wars universe, four millennia (or, to be precise, 3,956 years) prior to the events of the film that started that all, Episode IV: A New Hope. It follows the story of an unremarkable, customizable Republic soldier who ends up on a doomed starship in the middle of a war between the noble Republic and the villainous Sith Empire, ruled by Dark Lord of the Sith Darth Malak. The events that follow, starting with a quest to rescue a Jedi with the powers of Battle Meditation, become the focus of both sides of the conflict and could tip the balance either way in the war.. It eventually escalates to a confrontation between the protagonist and Darth Malak himself... and, after The Reveal, it gets personal.

The game is notable for its numerous tongue-in-cheek movie references and for being surprisingly better than the typical licensed game. This success can be attributed to not being a direct tie-in despite being based on a licensed property, thus avoiding a deadline to meet the movie's release. The plot was essentially Neverwinter Nights meets Baldur's Gate, but not enough to be classified as Recycled in Space.

The game was also instrumental to solidifying the Xbox as a versatile console (though, like most "exclusives" for the original Xbox, was also on the PC); before Knights of the Old Republic, the system had a distinct lack of roleplaying games and was derisively called an "FPS Box" due to the inordinate number of shooters on it.

It spawned a sequel by Obsidian Entertainment, Knights of the Old Republic II: The Sith Lords. The second game, set five years after the first, tells the story of an exiled Jedi who returns to a post-war Republic only to find it on its knees, the Jedi Order scattered and a new group of Sith on the rise. The protagonist is discovered by an old ex-Jedi, ex-Sith named Kreia, who helps the Exile reestablish a connection to the Force, find four Jedi Masters in hiding and defeat the Sith. However, Kreia is motivated less by nobility than an ancient desire for revenge against two Sith Lords and the great power of the universe.

The sequel despite being released rushed and unfinished due to Executive Meddling (an entire planet was deleted from gameplay and the ending was disjointed and nearly-absent, with many subplots Left Hanging) was still a relative success and, like its predecessor, firmly found its place in Star Wars canon, being referenced by later works. Its plot and general mood were noticeably Darker and Edgier than those of the original, with many elements carried over from Planescape: Torment, leaving fan opinions divided. A large portion of the lost content has been restored by The Sith Lords Restored Content Mod Game Mod (TSLRCM for short).

In 2006, the series saw a cross-media spin-off in the form of a prequel comic series, written by John Jackson Miller and published by Dark Horse Comics. The series started eight years before the first game and follows the course of the Mandalorian Wars, most prominently the adventures of Zayne Carrick, a wrongly accused Jedi Padawan on the run. So far, it has been remarkable for many a Red Herring, Revision and Author's Saving Throw; the author, having planned it for many issues in advance, apparently likes watching wild fan theories run amok.

In 2008, BioWare officially announced that there was to be an MMORPG set in the Knights of the Old Republic universe/time period, titled The Old Republic. However, this is not a sequel but more of a spin-off. For the record, Penny Arcade called it back in 2006.

For those who are curious, the Exile is canonically female, and the first game's player character is male. Eep.

These games provide examples of:

Knights of the Old Republic I

Knights of the Old Republic II: The Sith Lords

Retrieved from "https://allthetropes.org/w/index.php?title=Knights_of_the_Old_Republic_(video_game)&oldid=1931116"
Categories:
Cookies help us deliver our services. By using our services, you agree to our use of cookies.