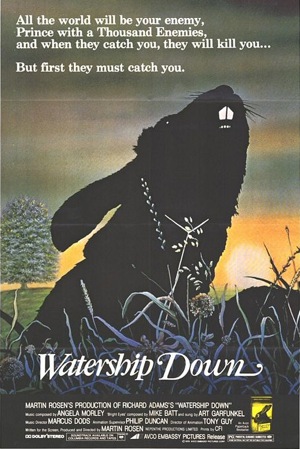 I Just Wanted A Movie About Bunnies[1]

Thlayli (Bigwig) had made his way up the run and was crouching immediately below. Blood had matted the great thatch of fur on his head, and one ear, half severed, hung down beside his face. His breathing was slow and heavy.
—Chapter 47 ("The Sky Suspended")

"It's about bunnies."
—Sawyer, Lost

Hazel, our protagonist, has a little brother named Fiver. Fiver has horrific—and as later events prove, accurate—visions of the destruction of their home warren at Sandleford, but Hazel can't convince their Chief to pay attention to some loony runt, so he convinces a few of his friends to join him in leaving their homes to escape. Of note are Bigwig, one of the community's Owsla (guards), and Blackberry, who is by the standards of their tribe a mechanical genius. Which is to say, he is the only cast member to even come close to understanding basic physics... like, for instance, "floating on water." Because, see, these are rabbits...

Yes, rabbits. Bear with us for a moment. They're not humans in rabbit form. Caution is a way of life because death is a moment-to-moment possibility. They can't count past four because they only have four paws (Fiver, the runt of a five-kit litter, gets his name from the Lapine word hrair, meaning "a thousand", but generally just meaning "lots", which is usually translated as just "five"). They think hrududil (cars and other large machinery) are some type of animal.

Only Blackberry, Fiver, and Hazel can really "think outside the hutch," so to speak. Hazel in particular quickly realises that survival as a tribe of hlessil (nomads) will require atypical problem-solving and teamwork, and thus becomes the de facto leader of the group, with a particular talent for bringing out the best in his followers and earning their loyalty in return.

Their journey is long - for a rabbit (about five miles). And it is punctuated by times of rest, during which they regale each other with tales of their Folk Hero, the first rabbit: El-ahrairah, the Prince With a Thousand Enemies. El-ahrairah is a Trickster hero (meet us halfway between Beowulf and Bugs Bunny and you've got the idea), and the legends we hear deal with everything from the rabbit's creation myth to El-ahrairah's descent into Inle to meet the Black Rabbit. And don't think that the stories are separate from the action, because they build up an intricate belief system that rewards us with major character moments, up to and including the very end of the story.

The novel proved so popular that, decades later, Adams wrote a set of sequel stories. Called Tales From Watership Down, the stories actually take place during the original novel, though after the resolution of the plot—that is, they expand on the warren's post-battle history that had previously just been given a brief mention in the original Epilogue. They include what became of Hyzenthlay; and additional tales such as "The Terrible Hay-making" and "The Hole In The Sky". Naturally, some fans like the book, others call Fanon Discontinuity.

Also notable is the animated feature film based upon the book. It's a very well-done Adaptation Distillation, and while it is no excuse at all for not reading the novel, it's well worth watching. As a matter of fact, reading the novel first enhances the film. The Studio Ghibli-style insanely detailed animation fits the story perfectly, and real effort is made to respect the seriousness with which the rabbits take their quest. (As an aside, it's really hard to imagine a film version working any other way; if you'd like an idea of how Narm-ful a live-action version might have been, look for The Film of the Book Jonathan Livingston Seagull.) The film is also notable for its voice cast, consisting of some of the best British actors of the day, including John Hurt as Hazel, Ralph Richardson as the Threarah, Nigel Hawthorne as Campion, Richard Briers as Fiver and Zero Mostel as Kehaar.

The thing is, the film is notorious in Internet culture for one simple reason: the Animation Age Ghetto affects it like almost no other movie. Certainly, DVD cover art like this doesn't help, but what gets us here at TV Tropes is that you'd think more people would have heard of the book. Parents of bunny-obsessed children, please do not subject your four-year-olds to such Nightmare Fuel as Bigwig's brush with death and his battle with General Woundwort, General Woundwort himself, the awfully long scene (scored to Bright Eyes) where Hazel is almost certainly dead and Fiver is lost without him, Blackavar's story, or Holly recounting how he barely escaped the destruction of Sandleford Warren. On the off chance you need further convincing, please note that the latter sequence, faithful to the novel, is a semi-hallucinatory depiction of cute bunnies clawing out the throats of other cute bunnies as they all slowly suffocate. Not For Little Kids.

There is also a far more obscure television series. In the first two seasons, it primarily changes aspects of the characters and story to make it appeal better to families e.g. making Blackberry female to add more diversity to the predominantly male cast.[2] Despite this, has some redeeming qualities, but that changes at the start of season three, perhaps in an attempt to make it Darker and Edgier. Some people enjoy even that, though.

Tropes used in Watership Down include:

"There is not a day or night that a doe does not offer her life for her kittens, or some honest captain of Owsla his life for his chief. But there is no bargain. What is, is what must be."

Dandelion: "We go by the will of the Black Rabbit of Inle' and only by his will... he will avenge any rabbit who many chance to be destroyed without the consent of himself."

Chorus: Why do you cry out thus, unless at some vision of horror?
Cassandra: The house reeks of death and dripping blood.

'But he is our protector, too. Anyone who has seen a gamekeeper's gibbet knows the vengeance the Black Rabbit can perform upon elil who think they can do what they will.'

As an aside, only Dinotopia has gotten even close to using as many Animal Tropes as this novel.