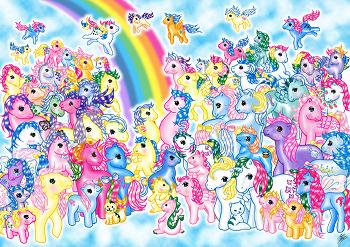 That's not even all of the G1 cast

Long-Running multimedia franchise that started humbly with a large horse doll with a brushable tail and mane made of doll hair.

Originally created by Bonnie Zacherle, My Little Pony officially started out as a toyline published and developed by Hasbro in 1982, following their 1981 My Pretty Pony toys. The first run of figures (called G1 by collectors) was eventually followed by two Television specials, one in 1984 and another in 1985, and a feature-length movie in 1986. A TV series, My Little Pony'n'Friends, was released later the same year and ran for two seasons before being canceled in 1987. In 1992, a strange new series, My Little Pony Tales, was aired. Other than being based on the same very general "Talking Animals get into adventures" idea, the new series had nothing to do with the old series (even the tie-in toys were only released in Europe), and had a genre change to Slice of Life and the stories were significantly milder compared to the original series. In the mid-2000s, a few Direct to Video movies were produced alongside the revival and anniversary of the beloved toy line. Currently,[when?] a new animated series (subtitled "Friendship is Magic") is airing, and, interestingly, it and its toy line follow an Alternate Continuity from the previous cartoons and toy line.

The early incarnations of the My Little Pony cartoon are set in the same world, with the same (very loose) continuity: The ponies are magical creatures living idyllically in Dream Valley, part of Ponyland (or Ponyland, part of Dream Valley - no two writers agreed on this point). Originally, the ponies resided in Dream Castle, but after The Movie (and the creation of that playset) they moved into Paradise Estate. My Little Pony Tales, the direct-to-video movies, and Friendship is Magic have their own separate continuities.

Ponyland is a Magical Land "on the other side of the rainbow" populated by Bushwoolies, Sea and Flutter ponies, Grundles, bee-people, talking pigs, giant terriers, and monster weeds, among other, weirder things. The ponies are assisted in their adventures by a teen named Megan; her siblings Molly and Danny; Spike the Baby Dragon; and the Moochick, a gnome wizard with a thing for mushrooms. Being a fantasy-esque weekday afternoon cartoon, the episode plots are adventures, normally focused on a Victim of the Week requiring the ponies' help to defeat some Big Bad. The weirdness -- and the overt scariness of some of the villains -- kept the show from being as dangerously cute as one might naturally assume.

The later series, My Little Pony Tales, does away with the fantasy universe and gives us a cast of Ponies who are little more than not-quite-anthropomorphic animals in a world like our own. Exactly like our own. These plots generally deal with such (ahem) exciting stuff like exams, sleepovers, football and baking cookies -- but with small horses! Suffice to say, the series only lasted for one season, however it has gained a cult following online.

An extensive guide to the toy line and a detailed episode guide for all the pre-G3 series can be found at (naturally) Dream Valley. Etherella's Scrapbook has info on the Ponies, along with info on them in the cartoon and comics.

The following tropes are common to many or all entries in the My Little Pony franchise.
For tropes specific to individual installments, visit their respective work pages.
Retrieved from "https://allthetropes.org/w/index.php?title=My_Little_Pony&oldid=1808412"
Categories:
Cookies help us deliver our services. By using our services, you agree to our use of cookies.