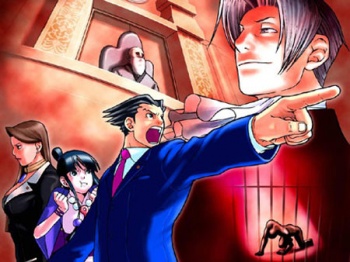 Behold the Power of Attorney!

The first three games in the Ace Attorney series star Phoenix Wright, a sympathetic, easily flustered Perry Mason with Anime Hair, who digs deeper into the mysteries surrounding his client's cases (which always seem to involve murder), butts heads with a host of eccentric characters, discovers clues and evidence the police miss, and uses those clues in court to force the truth out of witnesses and discover the true perpetrators. He fights alongside his late mentor Mia Fey and her Genki Girl sister Maya Fey.

They were originally developed for the Game Boy Advance, with the exception of the fifth case of the first game, "Rise rom the Ashes", which was exclusive to the DS remake, known as Gyakuten Saiban: Yomigaeru Gyakuten (Turnabout Trials: The Revived Turnabout) in Japan. The game plays out in a Visual Novel style through the perspective of Phoenix Wright during investigation sessions, where you can talk to other characters, present evidence and find clues to build up your case. Usually the next day, court begins, where you cross-examine witnesses to find contradictions, eventually forcing the real culprit to confess. Starting early on in Justice For All, you can try breaking characters "Psyche-Locks" by using evidence to tear their secrets apart and reveal vital information. The bonus 5th case of the first game took advantage of the touch-screen and mic on the DS allowing for more in-depth investigations on evidence.

The eponymous first game of the series chronicles Phoenix's first cases, Mia's death, and Phoenix's first battles with prosecutor Miles Edgeworth and his abhorrent tactics, culminating in a fierce face-off with Edgeworth's mentor, the legendary Manfred von Karma. In 2010, it gained a U.S. iPhone port. A live action movie directed by Takashi Miike was released in theaters in Japan in February 2012.

The second game Phoenix Wright: Ace Attorney: Justice For All introduces von Karma's prodigal daughter Franziska von Karma out for revenge after the events of the first game, and highlights the nature of the relationship between Phoenix and Edgeworth.

A further Updated Rerelease featuring all three games was released for iOS in February 2012 (currently in Japan only), targeted primarily at the iPad and replacing the pixel art in the GBA and DS games with scanned versions of the original character drawings.

Retrieved from "https://allthetropes.org/w/index.php?title=Phoenix_Wright:_Ace_Attorney&oldid=1695045"
Categories:
Cookies help us deliver our services. By using our services, you agree to our use of cookies.