Everything About Fiction You Never Wanted to Know.
Jump to navigation Jump to search
/wiki/Seltzer and Friedbergcreator 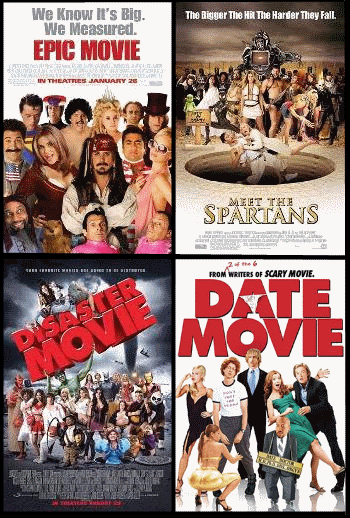 Aaron Seltzer and Jason Friedberg are a pair of writer/directors that collaborate with each other on all of their projects. They create comedic movies that parody and reference pop culture in the Zucker, Abrams and Zucker style of rapid-fire gags without concern for the overarching plot or characterization.

Their first official project was the 1996 film Spy Hard and they contributed one of the many scripts that was folded into the first Scary Movie, but they did not gain notoriety until 2006 with Date Movie. While panned by critics, the film made back triple its meager budget and secured them a contract to do a couple more films. While 2007's Epic Movie, January 2008's Meet the Spartans, and August 2008's Disaster Movie received worse critical reception and inspired a vocal Hatedom, it wasn't until the last that the public rejected them (although it's unknown whether or not the film's failure was simply due to the different audience provided by its August release). In 2010, the duo released Vampires Suck, a Twilight parody which was as poorly received as their previous works. This was followed by 2013's The Starving Games and Best Night Ever, and 2015's Superfast!, a parody of the Fast and Furious franchise. As of 2016, they are at work on a film tentatively entitled Who the F#@K Took My Daughter?.

In 2010 they announced an ambitious parody of James Cameron's Avatar called The Biggest Movie Of All Time 3D, to be released in 2012. However at some point shortly afterwards the project was abandoned and all official trace of it was "erased" from the Net -- promotional videos were removed from YouTube and even the IMDb page for it was deleted.

See also Superhero Movie and Dance Flick, which are often thought to be made by them.

Their work provides examples of:
Retrieved from "https://allthetropes.org/w/index.php?title=Seltzer_and_Friedberg&oldid=1830957"
Categories:
Cookies help us deliver our services. By using our services, you agree to our use of cookies.