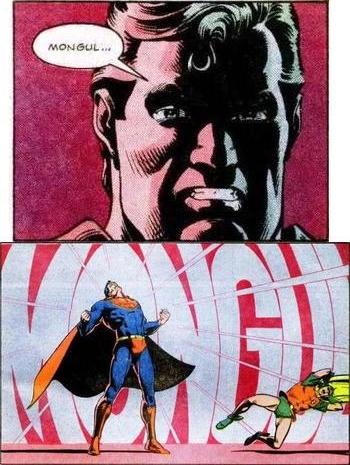 No matter what range of emotion you're feeling towards another character, the best way to express it is to say their name—preferably in either a hoarse whisper or scenery-chomping cry. Even if no one's around to hear you, just thinking about that character is enough of a prompt. It's all but required if you're in the midst of rescuing your True Companions/Love Interest currently facing imminent doom, you're running towards each other in romantic rapture, or when your mortal enemy has simply gone too far. Sometimes those last two get confused.

Additionally, if your show features Loads and Loads of Characters this also serves a narrative purpose: When they appear again after not being seen for three arcs, clearly stating their name once more helps the viewer identify and remember them.

Of course there are times (especially in Anime) when they overdo it (see Big Word Shout)...

Characters saying their own name can also fall under this trope, but if they do it incessantly, not for dramatic effect, that's Pokémon-Speak.

Many instances of this trope in Japanese works may also fall under First-Name Basis. In Japanese culture, it is customary to use last names plus an honorific (usually "san", sometimes "senpai" for one's elders, "kun" for underlings, "dono" or "sama" for works set in older times, etc.) when addressing someone else, even directly (they rarely use the pronoun for "you" in formal settings although they do have a few for informal situations). Children, especially girls, will often use first names with friends, although adults will usually only do this if they've been friends since childhood or are otherwise close buddies. But when a couple has moved ahead in their relationship, they will often switch to using first names as well. In media, the first time a character calls their romantic interest by their first name (whether out of affection or distress), the scene often ends up being an example of this trope.

Compare First-Name Basis, First Name Ultimatum and "You?" Squared, Skyward Scream. If you have a lot of people, all doing a "Say My Name" to each other, it's a Rocky Roll Call.

Contrast I Know Your True Name where speaking it has much more dangerous implications.

Not to be confused with the song of the same name by Destiny's Child, or the Magical Girl Lyrical Nanoha episode titled "なまえをよんで"..

Examples of this trope are often subjected to Memetic Mutation.

Examples of Say My Name include:

Optimus seemed rather angry to see Megatron alive and well (well, the fact he was holding the corpse of one of his friends didn't help), whereas Megatron seemed almost happy to see the former.

Retrieved from "https://allthetropes.org/w/index.php?title=Say_My_Name&oldid=1927438"
Categories:
Cookies help us deliver our services. By using our services, you agree to our use of cookies.