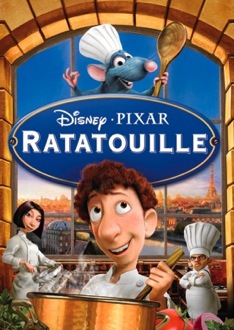 The eighth computer animated film by Pixar, Ratatouille is about a rat named Rémy who has a highly developed sense of taste and smell. Dissatisfied with eating garbage like the rest of his family, he wants to become a chef. When he winds up in Paris, he gets his chance to cook at the restaurant founded by his idol, Auguste Gusteau, by making a deal with the restaurant's garbage boy, Linguini, who (thanks to Rémy's interference) has been mistaken for a cooking genius. Rémy guides Linguini in the kitchen in a puppet-like manner so that Linguini doesn't lose his job, while Rémy gets the cooking experience (and critical fame) he desires.

For information on the preceding short Lifted or the follow-up short Your Friend the Rat, see the Pixar Shorts page.

Tropes used in Ratatouille include:
Retrieved from "https://allthetropes.org/w/index.php?title=Ratatouille&oldid=1830790"
Categories:
Cookies help us deliver our services. By using our services, you agree to our use of cookies.