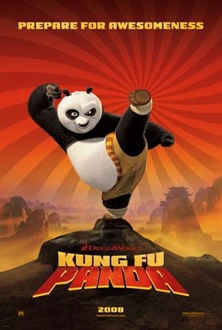 CG-animated comedy from Dreamworks Animation, or so the trailers would have you believe.

In actuality, it's about as balanced between humor and epic martial arts action as an old-school Jackie Chan film (which makes sense, considering he's Monkey's VA), with way, way prettier art.

Set in a anthropomorphic animal version of ancient China, the story follows Po, a kung fu enthusiast, as he starts as the (apparently adopted) son of a noodle shop owner and becomes the Dragon Warrior, just by landing in the right place at the right time. His battle for acceptance by the people he's looked up to his whole life leads him on both comic and tragic turns, especially once he finds out what being The Chosen One actually means: fighting Tai Lung, former disciple of Master Shifu and resident Badass, who was so scary that he got his own prison. A prison with a thousand armed, trained guards, carved into a mountain. From which he escapes...using a feather.

Keeping in step with the current kids' movie trends of walking the line between Affectionate Parody and playing it straight, there are some absolutely breathtaking action sequences and some truly, painfully epic failures. All in all, worth a look. And don't mind if the story seems familiar -- it's archetypal and awesome that way. The Chinese certainly thought so; they were so impressed at a film getting their culture's heritage so dead on that they had official conferences about why they can't make animated films like this.

It's also gotten a TV series on Nickelodeon called Kung Fu Panda: Legends of Awesomeness (with a lot fewer of the original voice actors), as well as the prime time Christmas Special Kung Fu Panda Holiday.

Now with a character page.

Secrets of the Furious Five contains examples of:

Retrieved from "https://allthetropes.org/w/index.php?title=Kung_Fu_Panda&oldid=1903634"
Categories:
Cookies help us deliver our services. By using our services, you agree to our use of cookies.