Everything About Fiction You Never Wanted to Know.
(Redirected from Useful Notes/United States)
Jump to navigation Jump to search

This page is about the Real Life location. For the related trope, see Eagle Land.

The United States of America -- commonly referred to as the United States, the US, the USA, the US of A, America, or the States—is a constitutional federal democratic republic occupying a large part of the continent of North America. It borders Canada from the south and Mexico from the north in its main territorial area. It also contains, off the mainland, the Hawaiian islands of the Pacific Ocean and a large state northwest of Canada called Alaska that shares a sea border with the Russian Federation. In all, the country consists of fifty states, one state-neutral capital city called Washington, D.C. (for "District of Columbia"), and assorted smaller commonwealths and protectorates. It is so huge (third largest overall, behind Russia and Canada respectively), in fact, that it would take days on end to drive from one opposite end to the other. One state of the fifty, Texas, the largest state in the mainland, is almost three times as large as the entire United Kingdom. So if you're planning to come here, don't expect to hit all the widespread landmarks in one trip unless you have a lot of time to spend and don't mind paying for many flights or sitting through long car drives (we don't have all that many passenger trains here anymore, aside from more local, smaller train lines that work within a city or across a fairly small set of towns).

Colonized by Europeans from the 16th century onwards, thirteen of the British-ruled colonies on the eastern coast declared independence in 1776 and combined to form their own country. The new nation then expanded westwards (to the unhappiness of the previous native population that it came into conflict with), acquiring land from France, Britain (not Canada), Mexico, and Russia, annexing the Kingdom of Hawaii, and small territory gains from military conflicts with Spain (now Cuba) and Japan.

Over the course of the late 19th century to the present, the United States became a superpower and is now[when?] technically the most powerful country on the planet[please verify]—it is technologically advanced and possesses a huge industrial base, a colossal military, and immense financial wealth. It is the largest exporter of modern media, its products being seen the world over.

The country's government consists of three branches, with the head of one of these (the executive branch) being commonly viewed as a main political leader: the elected President of the United States, Joe Biden as of January 20, 2021.[1]

The Parts of the United States of America 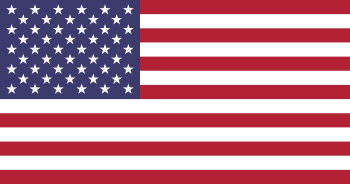 Flag of the United States of America

See Media Classifications for American (and other) video game and movie rating systems.

Retrieved from "https://allthetropes.org/w/index.php?title=The_United_States&oldid=1934233"
Categories:
Cookies help us deliver our services. By using our services, you agree to our use of cookies.