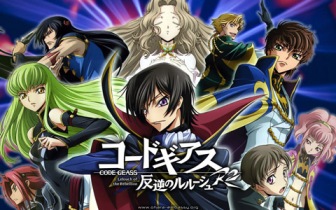 Code Geass: Lelouch of the Rebellion is a two-season anime series that aired from 2006 to 2008. The story is notable for playing with a lot of common tropes in interesting or entertaining ways and for having one of the most extreme examples of a Broken Base in recent memory.

The series takes place in an Alternate History where Britain won the American Revolution but lost a later war against Napoleon, who went on to conquer the British Isles. Many years later, this nation evolved into Britannia, a Social Darwinist empire which controls over a third of the world. Several years before the start of the main story, Britannia invaded Japan to secure a rare mineral that will make a new power source possible. Thanks to their Humongous Mecha, the conflict is ended in short order, with Japan only winning a single minor battle. The Japanese nation was stripped of everything—including its name—for almost a decade and is now referred to only by a numerical designation based on when the territory was conquered ("Area 11").

The story begins seven years after the invasion. Two friends who had met as children in the days before the war have bumped into each other again, now as young adults. One is Suzaku Kururugi, a career soldier of Japanese origin who hates bloodshed and has been rapidly rising through the ranks of the occupation forces; success represents his dream of earning a noble title in order to use the rights and privileges that come with such an honor to change the Britannian system from within. The other is Lelouch Lamperouge, an exiled Britannian prince who sympathizes with a revolutionary faction yet has become disillusioned by his inability to act; the success of this insurgency represents the opportunity to finally have revenge for the murder of his mother.

Lelouch encounters a group of rebels fleeing from a secret research project, and this chance encounter introduces him to C.C. (pronounced as "C Two"; in the Japanese, "Shi-Tsu"). C.C. offers Lelouch a faustian deal which will give him "the power of a king" (a supernatural power called a "Geass"). Lelouch's Geass manifests as an Evil Eye which allows him to give any order to a person, which must be obeyed. With this power and his incredible intelligence, Lelouch decides to overthrow the Britannian Empire. He then hides his identity behind the masked persona of "Zero," becoming the leader of Japan's resistance movement.

Meanwhile, Lelouch's friend Suzaku -who was the son of Japan's last free Prime Minister- has joined the Britannian military as part of his effort to change Britannia from within. After an encounter with the terrorists, Suzaku becomes the test pilot of the Super Prototype mecha "Lancelot" and is quickly placed against Zero and Lelouch in terms of both loyalty and ideals, which sets up one of the major conflicts of the series.

Geass began airing in October 2006 and soon became a runaway success, spawning a merchandising juggernaut and winning numerous industry awards. The brainchild of Planetes creators Goro Taniguchi and Ichiro Okouchi, Geass brought their usual style and flair for the dramatic to the Real Robot Genre. The series also received a good bit of early word-of-mouth thanks to the decision to hire CLAMP as character designers.

A sequel series, Code Geass R2, aired on Japanese television from April to September 2008; all that can be said from a neutral standpoint is that it generated what is possibly the most extreme example of a Broken Base in recent history. Both series and the first three manga are licensed in America by Bandai Entertainment; The two seasons ran (more or less) concurrently on Adult Swim. In late December 2008, Sunrise indicated its intention of continuing the franchise in the future, although no specifics were described.

Code Geass is noteworthy for producing an incredible amount of All There in the Manual, including Radio Drama-like Sound Episodes, Picture Dramas and DVD-exclusive short stories that help flesh out the show's universe or expand on its characters. In addition, there are also four Alternate Continuity manga:

The Code Geass property has produced three video games to date: a self-titled RPG for the Nintendo DS (mostly following the first season), a Visual Novel called Lost Colors and a board/party game (also for the DS) which focuses on the second season. The show has also been prominently featured in the two-part Super Robot Wars Z2 strategy game.

In December 2009, it was announced that there would be a new manga titled Code Geass: Renya of the Dark (script by Goro Taniguchi, art by Tomomasa Takuma), wherein the eponymous protagonist encounters C.C. and a man bearing an incredible resemblance to Lelouch in Edo-period (or at least its equivalent) Japan. In April 2010, plans for a new OVA -- Code Geass Gaiden: Akito the Exiled—were revealed; this new production will be a sidestory set around the same timeframe as the first season, but will focus on a different group of Japanese pilots fighting on the European front. Further details on this Spin-Off project were confirmed by the producers in August 2011 and January 2012. Separate plans for a film adaptation of the original Lelouch of the Rebellion story have also been announced.

In July 2012, yet another spinoff appeared: Code Geass: Nunnally in Wonderland, a Storybook Episode OAV featuring the characters as the cast of Alice in Wonderland.

The first season is available for viewing on YouTube. (Be aware that it will not work for viewers in the EU, who might want to try anime freak instead).

Compare and contrast with Production I.G's Guilty Crown, initially considered to be at least a partial Spiritual Successor to Code Geass, where Ichiro Okouchi worked as the assistant writer to Hiroyuki Yoshino under director Tetsuro Araki, using a completely different protagonist instead of Lelouch.

Tropes used in Code Geass include:

Retrieved from "https://allthetropes.org/w/index.php?title=Code_Geass&oldid=1962291"
Categories:
Cookies help us deliver our services. By using our services, you agree to our use of cookies.