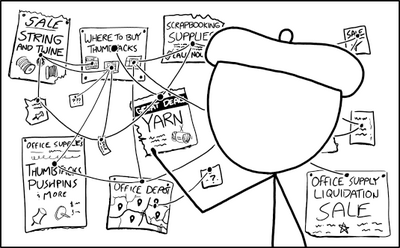 Describe Write your own crazy theories about Conspiracy Theorist here.

Yeah, right. That's just what they want me to do. They want you to think I'm schizophrenic, but that's part of The Schizophrenia Conspiracy. And while I'm here explaining to you what a Conspiracy Theorist is, their Men in Black show up in their silent black helicopters. I'm not stupid enough to reveal that I know the truth about Conspiracy Theorists.

Alright, I'll tell you what. I'll give you the official line about Conspiracy Theorist; what they want you to think. And you can think about that. And, if you decide that it doesn't really make any sense, then you can go out do some digging of your own. Maybe, just maybe, you'll learn the real truth. And if you can't find any proof of the real truth, that just proves that they destroyed the proof – probably to make room for all the so-called "evidence" that they manufactured that says the opposite. Who are you going to believe; scientists and historians, or me?

A Conspiracy Theorist attributes the ultimate cause of an event or chain of events (usually political, social or historical events), or the concealment of such causes from public knowledge, to a secret and often deceptive plot by a group of powerful or influential people or organizations. Many conspiracy theories state that major events in history have been dominated by conspirators who manipulate political happenings from behind the scenes. The Conspiracy is generally evil beyond evil. And yet despite how evil they are, they never betray each other, so the conspiracy stays together for thousands of years. How they accomplish this is unexplained. It is something beyond the wisdom of our puny minds.

Conspiracy theorists in the media may be associated with Right-Wing Militia Fanatics, and always seem to come off as somewhat mentally unhinged (though you and I know better, right?). This seems to be the case even when one of them catches the trail of a genuine Ancient Conspiracy or Government Conspiracy. Of course, said conspiracies have a tendency to try to silence the "kook" once they learn he's on to them, despite the fact that no one would actually believe he's telling the truth. This has the effect of:

There is a medical condition frequently attributed to conspiracy theorists: apophenia, "the tendency to see connections where none exist" (thank you, Question). But that's only what The Man and his crony doctors will have you believe. And as Agent Mulder would say: just because you're paranoid doesn't mean They're not out to get you.

Okay. That's the official line. The rest is up to you. I've left a few clues below to follow up if you want to find the real story. Be careful. The reptilians are watching you.

To those who still just don't believe me, then wake up, smell the muffins, and get off that bandwagon! And don't you dare say those things to me!

Oh, and if you ever get the urge to buy a copy of The Catcher in The Rye, for God's sake, resist!

Examples of Conspiracy Theorist include:

Remember, tin-foil hats preventing mind control is merely a lie cooked up by Reynolds Corporation in order to sell more tin-foil and fund the New World Order. But you didn't hear it from me.

Retrieved from "https://allthetropes.org/w/index.php?title=Conspiracy_Theorist&oldid=1914682"
Categories:
Cookies help us deliver our services. By using our services, you agree to our use of cookies.