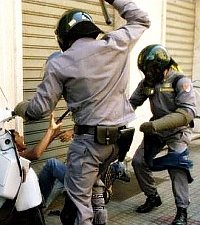 These anti-riot squad officers calmly tell a pedestrian not to litter.

When the police aren't incompetent, then they're sadistic bullies.

Even though nobody likes being bossed around by the police, it's their job, and they have to do it whether we like it or not. Some types of policemen, however, are thugs who take a cruel pleasure in beating and tormenting people they don't like, for no reason at all. And often this is a category that contains pretty much everyone.

Though Truth in Television to some extent, this is often exaggerated in fiction. Sometimes to make a statement about ethnic relations (Do the Right Thing); as part of a gloomy Film Noir-type Wretched Hive setting (Sin City); or as part of a futuristic Dystopian setting (Nineteen Eighty-Four).

Originally, a portrayal only American films got away with. For example, the critics responsible for French New Wave Cinema famously complained about censorship that forbade French police being portrayed as anything but professional and competent.

A quick breakdown of police brutality trends in fiction: the LAPD beats your ass and then decides what crime you committed; the NYPD shoots you a few dozen times then pronounces you innocent; 1930s cops are drunk Irishmen who beat you up for being Italian; 1960s cops are sober Irishmen who beat you up for having long hair; small town cops pull you over, tell you that your tail light is busted, and then bust your tail light with a nightstick when you ask which one (and give you a ticket for it); big city cops are uncompromising racists. Of course, all might not be as it seems.

Note: Now and again, American movies in the 1930s and 40s will show a cop shooting at an unarmed, running suspect. Though shocking to us now, this was not considered brutal or excessive at the time.

An action which is committed by a Rabid Cop on a regular basis. See also Killer Cop for when the police officer goes a bit beyond brutality. Not to be confused with the Police Brutality Gambit (although its users hope you will).

Examples of Police Brutality include:

Retrieved from "https://allthetropes.org/w/index.php?title=Police_Brutality&oldid=1872142"
Categories:
Cookies help us deliver our services. By using our services, you agree to our use of cookies.