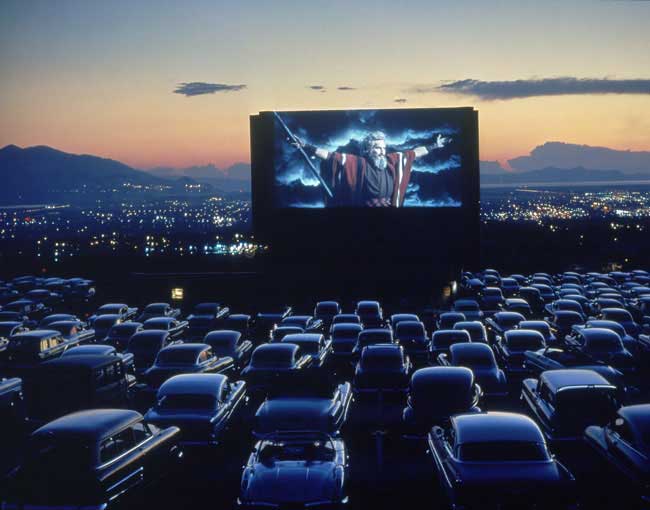 An iconic image from the drive-in's heyday. The movie is The Ten Commandments.

"If you're going to leave before seeing the next movie, You're Stupid!"
—D. Edward Vogel, owner of Baltimore's Bengie's Drive-In, over PA system between films.

The drive-in theater has been a fixture of American culture since The Thirties. Every summer night (and all year round in warmer climates), millions of viewers pay the admission fee for themselves and their friends (at least the ones who aren't hiding in the trunk), get some snacks at the concession stand, and watch two (or more) movies projected on an outdoor screen from the privacy and comfort of their cars. Although drive-ins are most popular in the United States, they exist around the world. The drive-in is an enduring symbol of Americana whose continued existence defies some heavy odds.

The Beginning: The drive-in theater was created in 1933 by chemical company magnate Richard M. Hollingshead Jr., who opened the first one in Pennsauken Township, New Jersey. It was popular enough that similar theaters began to open around the country. The drive-in became known as a place where a family could enjoy watching movies from the privacy of their car.

The Rise: Drive-ins really took off after World War Two; by their peak in the late 1950s and early 1960s, there were more than 4,000 drive-ins all across America. While they continued to show mainstream Hollywood fare for families, they also became popular with teenagers, who would come to see the latest B Movies (which usually dealt with Science Fiction monsters, juvenile delinquents, and early rock & roll). Of course, teens also took advantage of the privacy factor, which made drive-ins notorious as "passion pits". In the popular imagination, drive-ins are still associated with these tropes derived from the 1950s. However, this heyday was Too Good to Last...

The Fall: Drive-ins gradually declined for a number of reasons. The real estate they used became too valuable to "waste" on a business which could operate for only a few hours a day, a few months a year, and even then was subject to bad weather. Meanwhile, audiences began turning to home video, cable or satellite TV for their movie fix, or hitting up the then-new concept of the multiplex cinema. North American motorcars had become smaller (and less comfortable) due to the various energy crises in The Seventies; the re-introduction of Daylight Savings Time as a conservation measure shifted the start time of every film an hour later. Some drive-ins responded by changing their emphasis from family fare to the increasingly violent and sexually explicit exploitation and horror films that were, ironically, the successors to the 1950s B-Movies. (A few drive-ins even showed outright pornography.) Another common tactic was for drive-ins to add multiple screens. Some rented their land during the day to other businesses, such as flea markets — or managed such businesses themselves. A few operated amusement parks or other attractions to which the cinepark became merely a sideline. Especially in urban areas, the vast expanses of land necessary for a drive-in became too expensive to maintain, and the land was sold for redevelopment because it just wasn't financially feasible to keep it open. The same pressures with land costs were killing independent motels in favour of economy limited service hotel chains, while the drive-in "car hop" restaurant was supplanted by the drive-through format. Most drive-ins were forced to close between The Seventies and the Turn of the Millennium, with additional closures in the twenty-first century as studios refused to continue distributing content as reels of photographic film; the six-figure expense of new digital projectors (as the feature now arrived on computer hard drives) was often difficult to justify for a small, purely-seasonal business which was already struggling. In many cases, the land was even turned over to build a shiny new multiplex cinema. It seemed that the drive-in was headed for extinction—or was it?

The Resurgence: In the 2000s and 2010s, drive-ins have enjoyed a Revival; a few new theaters have even opened in the last few years. Some of this is due to Baby Boomer nostalgia, although many 21st-century drive-in visitors are too young to remember the medium's heyday. Also, a "guerrilla drive-in" movement has developed to show films in parks, parking lots and other open urban spaces. Drive-ins received an additional popularity bump during the 2020 pandemic: people could go to see a movie on a big screen and maintain physical distance from everybody else at the same time. Although it's unlikely that drive-ins will ever again be as numerous as they were during The Fifties, it seems that they're here to stay — at least for the foreseeable future.

During intermissions, drive-ins traditionally show advertisements for the snack bar, as well as public service announcements, ads for local merchants, safety messages and reminders of when the next movie is going to start ("10 minutes to showtime!"). These peppy, often animated ads have a following of their own; many are available on DVD compilations and in the Internet Archive's Moving Image Archive.

Many drive-ins have playgrounds for child patrons to use before the show.

They've also changed as technology improved. Originally, Drive-ins had physical speakers, attached by wire to a post, which you removed from the post, rolled down your window, placed the speaker inside, then rolled up the window. This often caused people to forget they had the speaker attached, causing them to drive off, usually ripping the speaker off the post and possibly breaking the window. (Some very small ones just had a single, large speaker.) Today, drive ins have low-power broadcast transmitters, that send the audio to your car radio. Some drive-ins even have digital sound (usually the DTS format, since they are the only company that does installations for digital sound in drive-ins). This also means, if the car has good stereo, that the sound can be as good as that in a high-quality walk-in theater. Some drive-ins run AM as well as FM signals for the few people who don't have FM radio.

Examples of Drive-In Theater include:

Thank you for reading the Drive-In Theater page! Allthetropes.org appreciates your patronage. Please remember to replace the speaker on the post when you leave the theater, and have a pleasant evening.