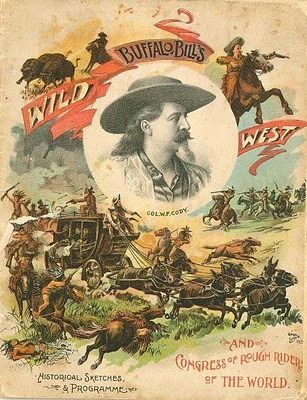 The American Old West was the land west of the Mississippi River roughly in or around the latter half of the nineteenth century; specifically we might start it at the California gold rush of 1848 and end it at the U.S. Census Bureau's official recognizance in 1890 of the end of the frontier. This setting is home to a definitively American genre almost as stylized and standardized as Commedia Dell'Arte. The Wild West is basically the Theme Park Version or fictionalization of this setting. It has its own set of specialized subtropes, including a wide assortment of stock character types and its own specialized locations.

The Theme Park Version of the old west is a land of Indians, grizzled prospectors, scenic bluffs, Conestoga wagons, tough, shotgun-toting pioneers and buxom, be-feathered dance-hall girls. Also home to very lucrative sugar glass and balsa-wood chair industries, judging by the number of bar brawls which occur during a single episode of a typical western series. Bad guys and anti-heroes wear black hats, good guys and sheriffs wear white hats, shootouts on Main Street occur with the frequency of at least one an hour -- with the sun at high noon each time -- and everyone drinks sarsaparilla or whiskey.

The real Old West was nothing like The Theme Park Version (which was originally the creation of 19th-century "dime novels"). There weren't any huge shootouts, quickdraw duels were rare, and not exclusive to desert-like "western" areas. Plus, since many guns were very inaccurate in those days, they sometimes tended to happen in significantly closer quarters than they do in fiction. The average Western town had 1.5 murders per year, and most of those weren't done with guns. The Wild West was not so wild -- it was boring, in fact.

See also The Western. A popular subject of The Parody, and surprisingly popular outside America. Frequently overlaps with The Savage South. Twilight of the Old West is a sub-trope about the dying embers of the Wild West flickering out during the early years of the New Old West.

Retrieved from "https://allthetropes.org/w/index.php?title=The_Wild_West&oldid=1678428"
Categories:
Cookies help us deliver our services. By using our services, you agree to our use of cookies.