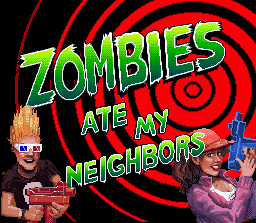 Zombies Ate My Neighbors is your classic Zombie game created by LucasArts and published by Konami. This game is basically a parody of Devil World/Dark Adventure, a previous Konami arcade game, and in turn had a Spiritual Successor in the form of Ghoul Patrol, which was significantly less popular. Also inspired a later game loosely on Greek Mythology called Hercs Adventures as well as the Xbox 360 game Monster Madness.

Zeke or Julie (or both in 2 player mode) enter a series of mazes. Each level is a punny-titled maze containing B-movie monsters, wacky weapons and up to ten neighbors to rescue.

A movie based loosely on the game is currently in production. Seriously.

Tropes used in Zombies Ate My Neighbors include:
Retrieved from "https://allthetropes.org/w/index.php?title=Zombies_Ate_My_Neighbors&oldid=1709678"
Categories: