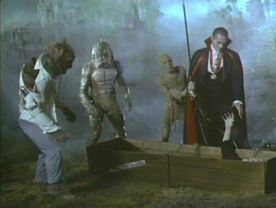 The original Creatures of the Night.

Hey, wouldn't it be cool if Dracula, the Wolf Man, the Mummy, Frankenstein's Monster, Gillman, and all those other classic monsters hung out?

Short version: Yes. Yes it would.

This is prevalent in a setting where the heroes live on Planet Eris as part of a Fantasy Kitchen Sink with a sprawling Crossover Cosmology, especially if they themselves are supernatural. The creatures, rather than become shut-ins, never leaving their designated niche or dark corner of the world... socialize. The Vampires and Werewolves, though antagonistic, agree to hold up a mutual Masquerade against humans. Fairies and ghosts work together to scare local homeowners. And the wizards work with all of them to Save Both Worlds.

On a personal level, individuals of these groups might form loose bands (of Player Characters, usually) that work towards common goals, hang out, or terrorize humans for fun and profit. Or, if the setting permits, are all in on a secret, ancient conspiracy to control, manipulate, or convert humanity, eventually taking over and enslaving us all! Bla-hahahaha!

You can expect all this canoodling to result in a Hybrid Monster sooner or later.

A Sub-Trope of Massive Multiplayer Crossover.

Not to be confused with the PC game Monster Bash, nor the coin-op of the same name, although both are very much examples of this.

Examples of Monster Mash include:

Retrieved from "https://allthetropes.org/w/index.php?title=Monster_Mash&oldid=1948773"
Categories:
Cookies help us deliver our services. By using our services, you agree to our use of cookies.