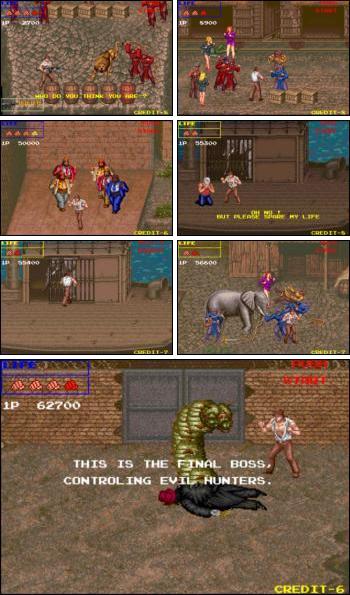 We expect bosses, situationally if not logically. They're going to be there after a save point (hopefully), at the end of the dungeon, or the climax of the story. You may hate the Quirky Miniboss Squad or the Goldfish Poop Gang, but it makes sense you'll fight them, and then The Dragon later. Then maybe his boss, who might go all One-Winged Angel on you.

But bosses don't always mesh well with the storyline, with some functioning more as checks to make sure the party is leveled up properly to this point. And sometimes they just come right out of nowhere, without foreshadowing, or are completely inappropriate to the game up until that point.

This is a Giant Space Flea From Nowhere: A boss with no relevance whatsoever to the actual plot, and who comes out of nowhere in a way that jerks you out of Willing Suspension of Disbelief. They are frequently mindless creatures or beasts as opposed to actual characters, and tend to appear at the end of unimportant plot threads, such as Fetch Quests.

Compare the non-video game boss equivalent, the Non Sequitur Scene, which applies mostly to scripted scenes that came out of nowhere and have little or no mention of it afterward. If the boss and/or the battle is really weird and nonsensical even in the context of the game, there may be some overlap between the two tropes.

Note that, contrary to what the name might at first seem to indicate, the Space Flea is not always an Eldritch Abomination, though overlap is possible. If it makes sense in the plot, it is not this trope regardless of how weird the boss might be. In other words, Lavos, Jenova and any other alien world-destroying parasites that are essential to the storyline of the game do not qualify, even if they're literal space fleas from the darkest depths of the universe. In more fantastical settings, they tend to be Single Specimen Species.

Also, note that most games that include Random Encounters, or that have no thematic consistency to their enemies, are pretty much incapable of having a Giant Space Flea From Nowhere. In those games, even the normal enemies appear suddenly and without any connection to the story; the bosses are therefore just a plain old instance of Gameplay and Story Segregation, same as the normal battles. For those games, bosses would only fall into this trope if all of the following is true:

Diabolus Ex Nihilo is the non-video game equivalent: a bad guy who pops up out of the blue, does some damage and dies. Contrast Outside Context Villain, which is a villain whose indeterminate origin is the source of their mystery and danger. If the Space Flea is an already established part of the franchise/universe but still came out of nowhere, it's Hijacked by Ganon. Sometimes explained with All There in the Manual, but that might be an Author's Saving Throw. As you can see, many a Bonus Boss is not included because they are technically a Bonus Boss and may even be outside of canon.

Examples of Giant Space Flea From Nowhere include:

Retrieved from "https://allthetropes.org/w/index.php?title=Giant_Space_Flea_From_Nowhere&oldid=1963241"
Categories:
Cookies help us deliver our services. By using our services, you agree to our use of cookies.