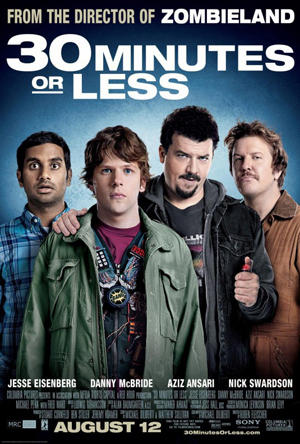 From left to right: Chet, Nick, Dwayne, and Travis.

30 Minutes or Less is an action-comedy, starring Jesse Eisenberg, Aziz Ansari, Danny McBride, and Nick Swardson, and directed by Ruben Fleischer, who also did Zombieland.

Two slackers named Dwayne and Travis want to make a hundred-thousand dollars quickly so they can hire an assassin to kill Dwayne's father, the Major, and get his inheritance money. Eventually, they come up with a sensible idea: order a pizza, have it delivered, kidnap the pizza man, strap a bomb to his chest, and force him to rob a bank or the bomb will detonate. The unfortunate delivery man, Nick, teams up with his best friend Chet, whom he recently had a falling out with when he confessed that he had slept with Chet's sister, to get the job done.

The plot is very loosely based on the story of poor Brian Wells, who was killed when the bomb went off unexpectedly. The cast and crew deny having prior knowledge to this incident, possibly to avoid cries of “Dude, Not Funny”.

Tropes used in 30 Minutes or Less include:
Retrieved from "https://allthetropes.org/w/index.php?title=30_Minutes_or_Less&oldid=1485035"
Categories: