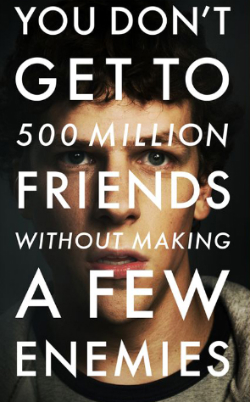 The face that started it all...

The Social Network is a 2010 film by David Fincher. Largely in flashback, it tells the story of the founding of the phenomenally successful Friending Network Facebook and the rise of its founder, Mark Zuckerberg, to the status of youngest billionaire in history (with some artistic liberties).

Set at Harvard, in the winter of 2003 Mark develops a student "hotness" rating website (using illegally obtained pictures) that becomes so popular it crashes Harvard servers. His resulting publicity catches the attention of the Winklevoss brothers (twins), who conscribe him to develop a Harvard exclusive networking website. Mark takes that idea and works out a related networking website with his close friend Eduardo, who fronts the money for the start-up costs.

The Facebook becomes an instant hit, with neither Mark nor Eduardo knowing exactly where to go from there. Along comes Napster legend Sean Parker who wiggles himself into the business and outlines how big this project is going to end up. Mark is enraptured by Parker's vision but Eduardo is constantly worried that it's growing too big too fast. On another front the Winklevoss twins are enraged that Mark effectively "stole" their idea, which raises the question of how closely The Facebook matches their original idea and the validity of Intellectual Property.

Jesse Eisenberg stars as Zuckerberg, Andrew Garfield as Eduardo Saverin, Brenda Song as Christy Lee and pop singer Justin Timberlake as Sean Parker. The script was written by Aaron Sorkin, adapted from Ben Mezrich's 2009 book The Accidental Billionaires. None of the Facebook staff, including founder Mark Zuckerberg, were involved with the project. One of the co-founders, Eduardo Saverin, was a consultant for Mezrich's book.

Film critics praised it to high heaven; among its accolades is declaration that this film is "the Citizen Kane of the 21st century". Among the frequently-mentioned strengths include the well-written script, beautiful visuals, and its tackling of the question of what it really means to be "connected" (or rather disconnected) in modern society. The general consensus seems to be that the film is one of those rare milestones that captures the spirit of the time it was made.

Tropes used in The Social Network include:
Retrieved from "https://allthetropes.org/w/index.php?title=The_Social_Network&oldid=1613201"
Categories:
Cookies help us deliver our services. By using our services, you agree to our use of cookies.