My Sister Is Off-Limits 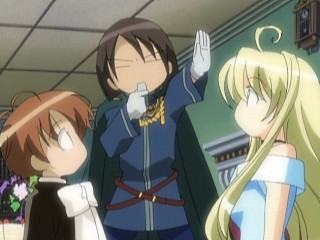 Charlie is attracted to Alice, and she shares his feelings. Unfortunately, Alice is Bob's sister, and Bob and Charlie are the closest of friends. As such, Charlie feels it's wrong for him to date Alice, no matter how much he wants to.

A major Truth in Television trope, as most any guy can tell you. If you've known someone for more than 24 hours, his sister is off limits. Forever. Some reasons behind this are:

This may also be a symptom of a character having a Big Brother Instinct, if Bob is angry at Charlie for dating Alice, but Bob and Alice aren't actually related, or are just friends.

Could lead to a Knight Templar Big Brother.

Note that while the title says 'sister', this includes mothers, brothers, cousins, and even more extended family. Except daughters, because Overprotective Dad already covers that. Exes fall under The Bro Code instead.

Not to be confused with Brother-Sister Incest. Unless that's why they don't want anyone dating her.

Examples of My Sister Is Off-Limits include: