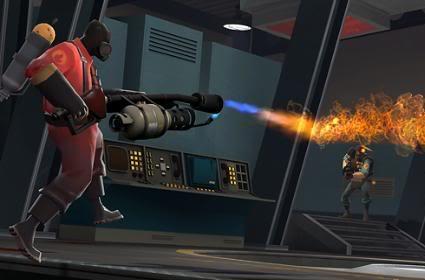 Sometimes, you have an opponent, structure, device or other target which you just got to Kill It with Fire. If you have to do this multiple times, you would wish you have an actual weapon which can burn things for you instead of rigging something on the spot all the time.

You will need the Fire-Breathing Weapon; a gun-like weapon which creates fire. Pull the trigger and a gout of fire will appear, covering your target in burning goodness. Most games use a form of directional Splash Damage to implement this.

Of course this is not limited to the flamethrowers alone: various (directional) bombs, traps, improvised weapons and even vehicle cannons can fall under this category. The common similarity between all the weapons here is they all use "Kill It with Fire" as their main form of causing damage, and they are all "point and burn" weapons.

Weapon of Choice for the Pyromaniac. Sometimes used for lighting cigarettes.

PS: If you use this weapon on your target, and it stands up uninjured yet on fire and quite pissed off... well, it's nice knowing you.

Examples of Fire-Breathing Weapon include:

Retrieved from "https://allthetropes.org/w/index.php?title=Fire-Breathing_Weapon&oldid=1883513"
Categories:
Cookies help us deliver our services. By using our services, you agree to our use of cookies.