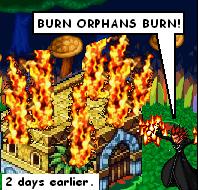 The first strip. It pretty much goes downhill from here.

It can be found right here.

Yeah, it isn't the nicest of webcomics out there. Read at your own risk.

Tropes used in Ansem Retort include:

Retrieved from "https://allthetropes.org/w/index.php?title=Ansem_Retort&oldid=1912504"
Categories:
Cookies help us deliver our services. By using our services, you agree to our use of cookies.