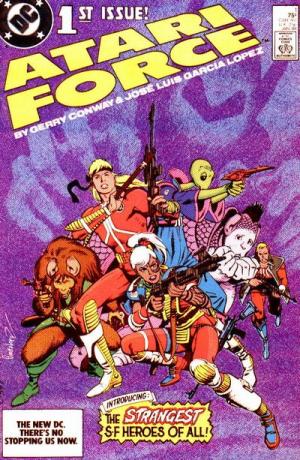 Atari Force is the name for several comic book series developed and published by DC Comics.

The original series was first published in 1982 as a set of promotional giveaways with selected Atari 2600 video games. It covered the efforts of the Atari Force as they participate in "Project Multiverse", a mission to travel across dimensions and find a new planet for humanity to inhabit after the current Earth is pushed to the brink of collapse by global warfare. While most of the stories were standalone, the team repeatedly clashed with the Dark Destroyer, an interdimensional monster out to conquer the multiverse. The stories were written by Gerry Conway and Roy Thomas, with art by Ross Andru and Gil Kane.

The DC graphic novel Star Raiders is a Spin-Off of issue #3. The pack-in comics can be read here.

The second series was first published in 1984 as a regular monthly comic under the DC label. Set 25 years after humanity's resettlement, it centered on the adventures of the children of the original crew. Their lives are disrupted by the return of the Dark Destroyer, who has discovered the dimension where humanity has relocated and is preparing to avenge his earlier defeats by humiliating Martin Champion and then destroying the universe. The writers were Gerry Conway and Mike Baron, with art primarily by Jose Garcia-Lopez; later issues featured backup stories by Keith Giffen, Paul Kupperberg, Klaus Janson, James Fry and others.

Tropes used in Atari Force include:
Retrieved from "https://allthetropes.org/w/index.php?title=Atari_Force&oldid=1912238"
Categories:
Cookies help us deliver our services. By using our services, you agree to our use of cookies.