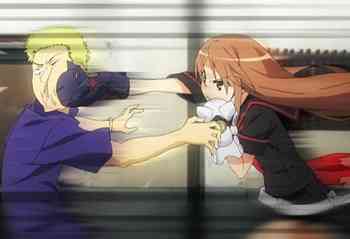 Like the Old Master, the Cute Bruiser is a living, breathing, frequently painful lesson in never judging a book by its cover.

The Cute Bruiser's Weapon of Choice will probably be Good Old Fisticuffs, a club, or martial arts that focus on direct blows to your opponent instead of pressure points or judo throws. They'll only rarely be using a bladed weapon or depending on projectile weapons, with the exception of throwing heavy objects. When confronted with an obstacle, the obstacle gets smashed.

This is usually The Big Guy in a Five-Man Band, a common subversion of the usual traits associated with that character type. Almost always a Pint-Sized Powerhouse. Often a Badass Adorable or Little Miss Badass. Possibly a Super Strong Child, in which case she may be a Glacier Waif. Tends to overlap with Small Girl, Big Gun when firearms are present.

Contrast with Boobs of Steel, as this type of character will usually be Token Mini-Moe.

Examples of Cute Bruiser include:

Retrieved from "https://allthetropes.org/w/index.php?title=Cute_Bruiser&oldid=1882884"
Categories:
Cookies help us deliver our services. By using our services, you agree to our use of cookies.