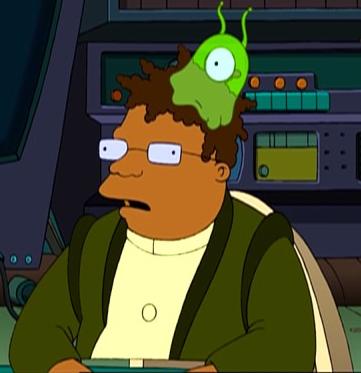 Parasite? What parasite? This is just my stylish new hat. Ha ha.

A form of Body Horror common in alien-invasion plots. Aliens, rather than invading in their own form, insert themselves into (usually) unwilling humans, whereupon they completely take over the host's body, suppress their will, and generally make them not themselves. They generally do this because their natural form is some kind of grub or other not-very-formidable state.

They may have limited or total access to the host's memory, but can generally fool casual observers. A possessed host typically gains increased strength, and sometimes additional wacky powers. They may also be able to affect a Voice of Evil or glowing eyes, to let the audience know what's up.

This will fool everyone until the critical moment, even though a possessed host usually starts exhibiting really strange symptoms such as a lack of emotion, a surplus of emotion, violent rampages, festering sores, a flue gill, or a penchant for ketchup.

Sometimes, the possession process actually kills the host, turning them into an animated cadaver. If the host is left alive then they may or may not remain aware while possessed. No matter what the case is, it generally takes a Deus Ex Machina to remove the parasite without killing the host.

The method by which the parasite enters the host body varies; it might be injected, it may latch on to the host's back, or it may enter as some kind of Energy Being. Crawling in through the mouth or ears is also very popular. This trope may also be used as a Anvilicious metaphor for venereal disease. A controlling alien that doesn't invade the body is The Hypnotoad.

Also, for some reason, possessed bodies often melt when killed.

Very popular in films during the Cold War era, as it made such a handy parallel for communism. One of the most recent (and most self-aware) film examples is The Faculty.

While the notion is rooted in myths of Demonic Possession as old as mankind, the Sci Fi version is named for the Robert A. Heinlein novella The Puppet Masters, which pretty much every instance of this trope is reusing.

Contrast They Look Like Us Now, where the Masquerade is limited to posing as human without being able to replace/control specific individuals. Compare Living Doll Collector. Can overlap with And I Must Scream.

Examples of Puppeteer Parasite include:

Retrieved from "https://allthetropes.org/w/index.php?title=Puppeteer_Parasite&oldid=1882271"
Categories:
Cookies help us deliver our services. By using our services, you agree to our use of cookies.