Samus Is a Girl 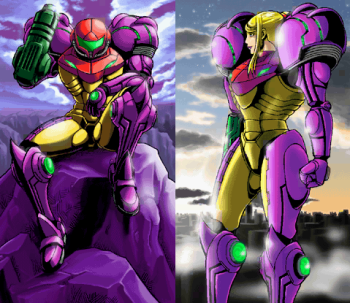 You were expecting somebody else?

Bob is really in over his head, now! He's surrounded by more mooks than he could hope to defeat on his own. Suddenly, a stranger in full armor comes from nowhere and makes quick work of the whole lot of baddies. The warrior then turns to Bob, takes off his helmet and... holy crap! It's a girl! Alice arrives!

Samus Is a Girl is when an Action Girl is well established as heroic or otherwise Badass before the first hint that she's female. Whether the initial lack of discernible sex is caused by bulky armor, baggy robes, subtler deliberate deceptions, shapeshifting, or even just the camera refusing to give a clear shot of any distinctly female parts of her, it's still Samus Is A Girl. Heck, a tank with a chick inside would count. Having a Tomboyish Name helps as well.

Oftentimes, Alice will only wear the form-concealing outfit during her introduction. Afterwards, it may end up getting lost or destroyed, and thereafter she wears something a little less ambiguous. Sometimes, she just stops on her own.

This trope is notably harder to pull off in some languages - those that don't use gender-neutral descriptors that much. (On the other hand, it's very easy to pull off with some foreign characters, since quite a few Japanese and African names can be assigned to either gender.) It's one thing to say Samus is a bounty hunter, but when your language demands that if the gender is known, this should be bounty huntress, characters that do know about Samus' gender and just don't care to elaborate to the listener couldn't just call her a bounty hunter without stretching suspension of disbelief. It's one thing to trick the viewers by clever terminology, but when you break your language to do it, the effect becomes not so much "Hey, that's right, the gender was never actually mentioned!", but "Um... so the character who was referred to as male by others who knew she was female all the time was actually female. Huh?".

Thanks to pervasive Double Standards, a previously-thought female revealed to be male is most-guaranteed to be classified as an Unsettling Gender Reveal, while the opposite (this trope) acts as a "Comfortable Gender Reveal". In fact, straight gals and gay guys would almost certainly think the reverse.

Compare to The Faceless, Sweet Polly Oliver (Samus Is a Girl from a viewpoint that already knows she's female) and Viewer Gender Confusion (where the audience, not the characters, don't know what gender Pat is). See also Geeky Turn On, which is sometimes related to this. Depending on how it's written, The Reveal could end up being a Tomato Surprise.

WARNING! There are unmarked Spoilers ahead. Beware. The fact the title of this trope gives an example is a pretty good reason why this trope should not be spoiler tagged, right?

Examples of Samus Is a Girl include:

Retrieved from "https://allthetropes.org/w/index.php?title=Samus_Is_a_Girl&oldid=1952266"
Categories:
Cookies help us deliver our services. By using our services, you agree to our use of cookies.