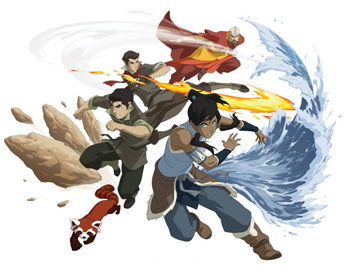 The Legend of Korra is an Animated Series from Nickelodeon and a Sequel Series to Avatar: The Last Airbender, which premiered on April 14, 2012.

Set seventy years after the events of its predecessor, the series follows the adventures of a rebellious teenage Southern Water Tribe girl named Korra, Aang's successor as Avatar. Her quest leads her to Republic City, a metropolis based off the Roaring Twenties where crime is rampant and an anti-bender revolt headed by a faction called the Equalists is taking place. Under the guidance of Tenzin, the son of Aang and Katara, Korra struggles to master Airbending and bring harmony to Republic City.

While it was originally announced as a twelve-episode Miniseries, Nickelodeon picked up an additional fourteen episodes during production, with option to renew. The first two episodes received a limited online release in the United States from March 24th-25th as a reward for liking, sharing and tweeting the website KorraNation 100,000 times.

Recaps of the show can be found here. Also has a page for memes.

Not to be confused with The Legend of Korah, or the Kohr-Ah.

Tropes used in The Legend of Korra include:

Retrieved from "https://allthetropes.org/w/index.php?title=The_Legend_of_Korra&oldid=1970652"
Categories:
Cookies help us deliver our services. By using our services, you agree to our use of cookies.