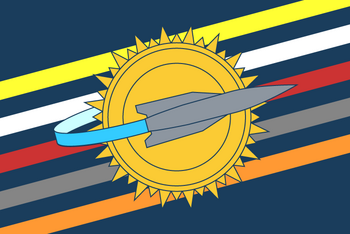 In the first decade of the 21st Century, a miracle substance nicknamed "handwavium" appeared seemingly out of nowhere. Handwavium had properties that defied the known laws of physics, and could bring the impossible within reach of the ordinary person: space-capable flying cars, subtle and obvious modifications of the human body, even create new life from dead matter.

Scientists studied it. Governments feared it. The rest of the world didn’t care all that much. Science fiction fandom saw handwavium as the key to making their fantasies reality, and took advantage. Fans founded the Crystal Cities of Venus, the topless towers of Helium on Mars, the bottled city of Kandor on the Moon, built farms in the sky and sailed beyond the edge of the solar system to the near stars.

It’s a brand-new Space Age, and the people who want to go are the ones leading the pack.

Originally set Twenty Minutes Into the Future (and trying its best to stay there), Fenspace is a Web Original collective writing project hosted on Bob Schroeck's Drunkard's Walk Forums. It is supported by both a wiki and a story archive.

(Fair Disclosure: At least two of the All The Tropes admins have written stories set in Fenspace, so we might be biased here. Other viewpoints are requested.)

Fenspace incorporates the following tropes (sometimes by deliberate action of its inhabitants):